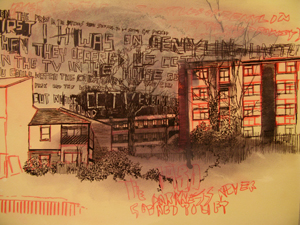 SLUMP CITY, an exhibition hosted by SPACE Studios, looks at the effects of the global recession on the proposed regeneration of East London.

Contemplating inner-city London and the peripheral borders, Slump City was conceived by SPACE Studios as a response to the economic downturn: its cause and consequences.

From 6 -26 June 2009, SPACE is hosting an exhibition of three emerging artists who are all connected to East London, with each artist presenting her own perception of the darker side of London.

With the promised Olympic legacy, and planned regeneration of East London looking increasingly fragile, an air of unease lingers as the local residents endure suspense instigated by the recession. When London won the bid to host the 2012 Olympics, the huge artistic community of East London looked set to suffer but, as development plans take a back seat, they are yet to learn of their fate. 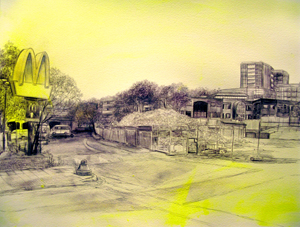 SPACE, a Hackney-based arts organisation and charity, aims to support developing artists by offering affordable studio space as well as connecting the community through various workshops and events.

“Regeneration plans in connection with the Olympics have meant that there are increasing numbers of big developers moving into the area, and they have little interest in supporting the artistic community that has built Hackney’s reputation,” explains a spokesperson from SPACE.

“We have found it increasingly difficult to find the types of properties where we can keep the rents affordable for the 600 artists we provide for over 18 buildings, of which ten are in Hackney.”

Discussing the cultural industries and the magnetism that artist communities create for developers, one of the exhibiting artists, Laura Oldfield Ford, shares her concerns over the so-called Olympic legacy. “It’s a kind of paradox or a conflict for me, because artists are often used as a forum for regeneration or gentrification processes. If you allow artists into an area, it’s breaking down those barriers, or opening it up for developers to come, and so there’s a conflict inherent in my critique”.

Oldfield Ford focuses her attention on London’s barren perimeters. Walking around the city, she creates her own subjective engagement with different areas which act as inspiration for her popular zine – Savage Messiah.  She explains that “there’s a poetic engagement and then there’s an outright polemical content but I always talk about channelling currents or remnants of past oppositional currents that have been misplaced.”

Concerned by the massive regeneration process that is happening at the Olympic site between Stratford and Lower Lea Valley, Oldfield Ford organises walks around the perimeter fence.  “It’s an opportunity to form a kind of hub or a node where people can come together and talk about their memories of a place, or ideas, because those kinds of ideas haven’t disappeared – they’re just lying dormant. So it’s about coaxing that out.”

For Slump City, Oldfield Ford will create a whole new body of work as she feels it is important to keep moving things forward. It will be an installation of different drawings giving the effect of a fly-posted wall. During her mammoth walks around the city, Oldfield Ford documents London with photography and sketches which she then combines with text and poetry. She believes the writing and the drawing are inseparable, “they’re different manifestations of the same force or desire to engage with the area.” 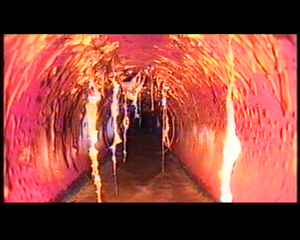 The Economy of Excess Karen Russo

In contrast to Oldfield Ford’s preoccupation with the desolate spaces above ground, Karen Russo immerses herself in the underground world. Inspired by society’s insatiable appetite for consumption, Karen Russo reveals our incessant gluttony in her video of the garbage bin of the world, the receptacle of the world’s used energy: the sewers.

The Economy of Excess explores the evidence of our greed: the labyrinth of peculiar passages that lie beneath our streets and are home to the inconceivably grotesque waste that we’ve accumulated as a society.

Asserting that the sewers’ excess is at once torture and happiness, Russo sends a small robot camera through the Essex sewer system on what she describes as a hypnotising voyage of impressionistic colour and light. At once revolting and delighting her audience, Russo manages to portray a sense of beauty in this vast and mysterious tangle of tunnels. 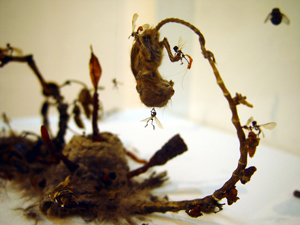 Resurrection of the Rat Tessa Farmer

Farmer plucks the wings from lifeless flies and wasps and then uses tweezers to attach them to the roots of aquatic plants from her father’s pond. Viewed under a microscope, the fairies are so intricately constructed that each rib is visibly intact.

“I was really quite squeamish at first,” Farmer admits, “particularly with the flies because their heads come off so easily and I just felt guilty, even though you know – a dead fly, I haven’t killed it but just taking off its head felt really barbaric.”

After years of practice, Farmer excitedly awaits the summer time for the inevitable onslaught of dead insects that it will bring. Entomologically informed, Farmer dissects the scenes that she creates, explaining in grave detail the function of each insect in her sculpture.

The study of human anatomy in her art degree was the spur that led to Farmer’s fascination with skeletons and form, whilst growing up with the Flower Fairies inspired the fairy-tale narratives behind her work. The fairies in her work are often demonic and feared. “I’m sure I have a dark side, I really mustn’t dwell on it too much, but the violence fascinates me.”

Farmer justifies the sometimes sordid scenes that she creates by explaining that this behaviour is going on all around us in the insect world. “It’s really quite barbaric and quite ingenious – the way insects come and survive and defend themselves in this alien universe that nobody really notices underneath the street – it’s very similar to fairies – a sort of parallel world.”

On the hunt for road-kill to use in the exhibition, Farmer explains that “the fairies are becoming more ambitious at hunting so they’re going after larger prey.” What will she be exhibiting for Slump City? “Well, the fairies’ ultimate catch would be a bear or something. That would be cool. Or an elephant. Imagine a mummified elephant!”

← Growing up on the estatesStand up and testify →