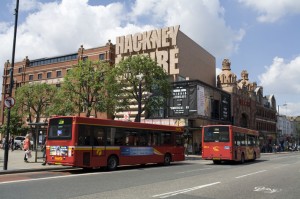 Mare Street, outside the Town Hall and Hackney Empire

WE started our journey at Finsbury Park on a blistering hot Wednesday afternoon.  The station itself is an uninspiring concrete triangle but it does boast a one-stop Arsenal emporium, souvenirs for all the family sorted before we even set off.

Hopping on the 236, by many accounts one of the more regular buses in the borough, our bus tour sets off down Blackstock Road.  Here you could be lucky to bear witness to a great London police raid as passengers did in March last year when an incredible 600-strong police force descended on this ‘hot-bed’ of petty criminal activity, entering nineteen different premises and seizing stolen property including 120 laptops, 50 cameras and dozens of satnavs, according to the police. 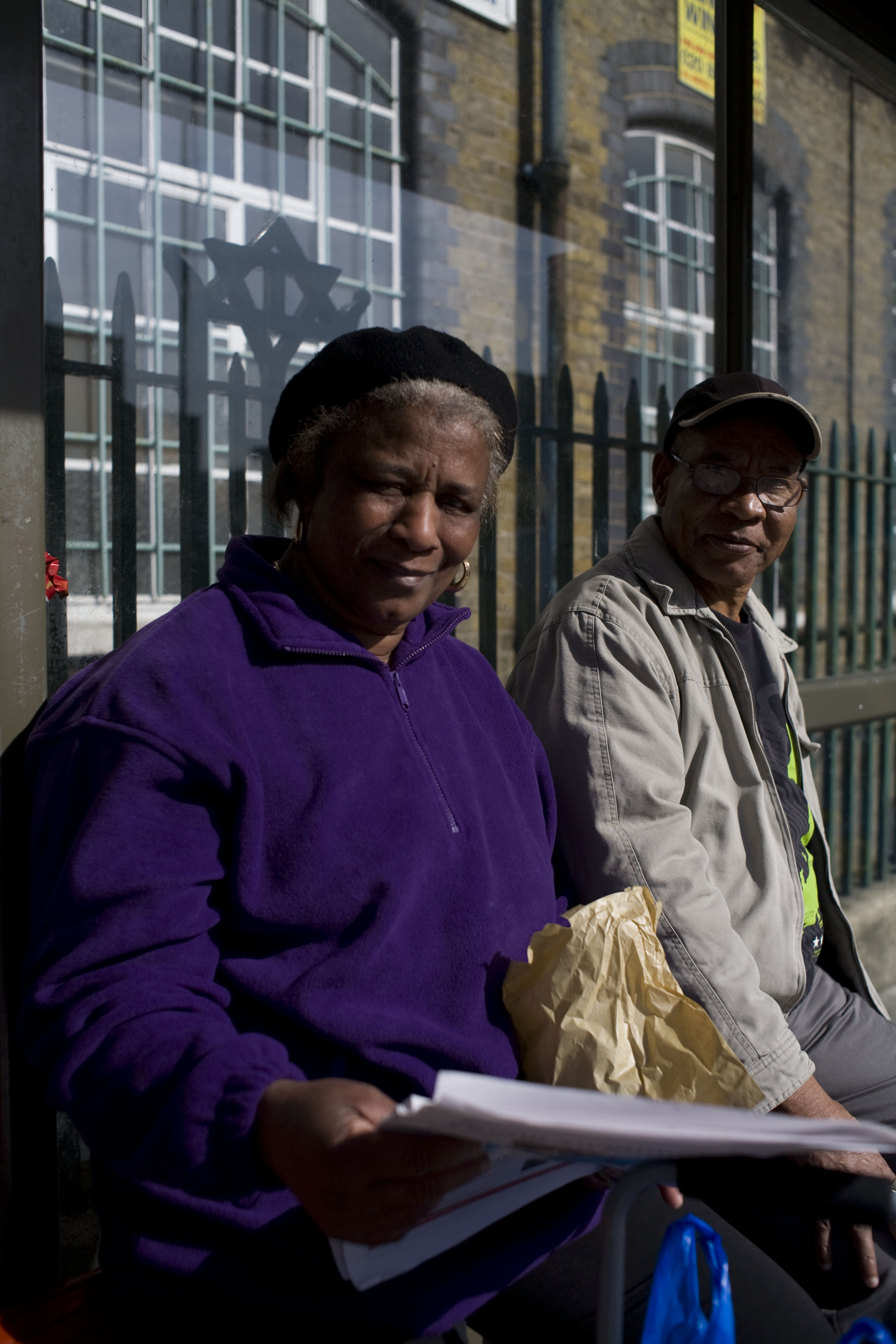 Luck notwithstanding we caught none of this and instead travelled down the charming street of colourful and imaginative shopfronts – look out for Mix DIY and Exquisito Mexican restaurant. While taking all this in, make sure to nab a prime seat on this well-used bus.  We opted for the forward facing first row where the seat is just low enough to get the full splendour of Hackney blazing through the window. One downside is that you may miss out on the inevitable commotion when a wheelchair bound for Homerton Hospital tries to compete with tired buggy-wielding mothers for that nether space of the bus.

But then this is a small price to pay for landing yourself a spot among the 236’s regular army of chatty pensioners.  On hops an enthusiastic Caribbean woman on her weekly mission to Ridley Road Market.  The thriving hub of Dalston since the 1920s, Ridley Road is the destination for many of our fellow passengers and the bus slowly empties and refills as we pass through its heart. 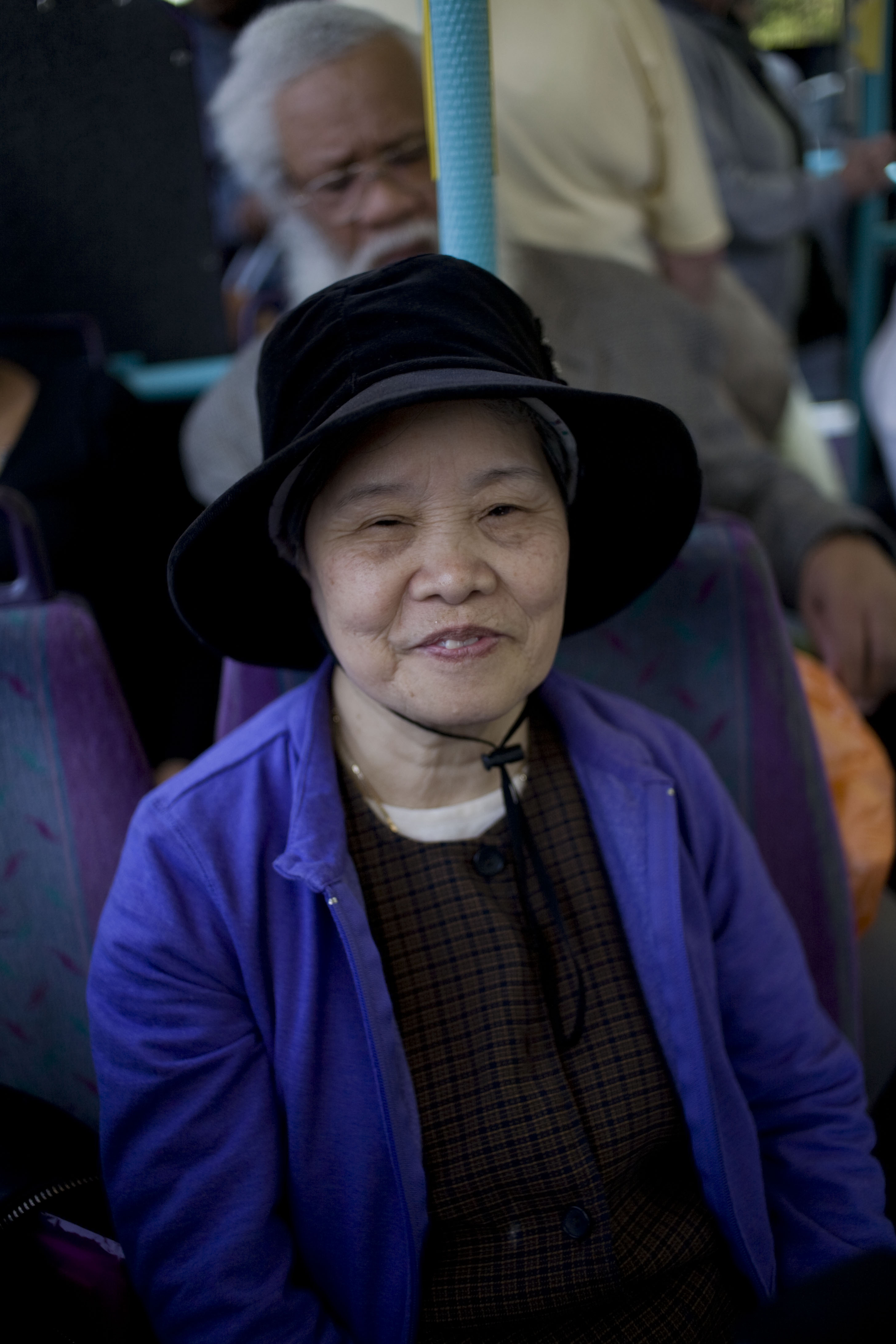 Enter Thi Nguyan,  a tiny Vietnamese woman who elbows her 4ft 9in frame past a group of gangly teenage boys and settles down beside us.  Thi is on her way to learn English in Englefield Community Centre.  At 73 years old and after more than 30 years already spent in England this is no mean feat.  But then the limit of her English and my dearth of Vietnamese brought our conversation to a quick halt.  Whether this is a comment on the diversity of our borough or its fragmentation I can’t tell.

By this time, we’re cruising along Queensbridge Road and past the infamous Holly Street Estate, the site of one of the longest-running regeneration projects in London.  Holly Street was made famous by Tony Blair in 2004 when he described ‘the society of fear’ that existed there in the 1980s.  It hit the headlines again in 2006 with the murder of Stevens Nyembo-Ya-Muteba, a father of two, by local gang the Holly Street Boys.

Despite massive regeneration programmes, things haven’t changed much on the estate as Tony, who’s been here for 49 years told us in a thick Italian accent. “It’s still rubbish and getting worse.” Neil, a young shop assistant was more positive. “Things are changing little by little but it’s still bad, take the sports centre for instance, I don’t even go there, the gangs control it.” He told us how last week a group of kids stole his cap off his head.  “People are moving out, the good ones go and the weird ones move in.” Winding down by Regent’s Canal and London Fields, our tour stops to let off a group of chirpy women.  They’re on their way to a bi-weekly lunch at the residents’ association on Brougham Road.  Cruising through the island of stylish young wastrels that populate Broadway Market, the 236 emerges on Mare Street before winding its way around Homerton Hospital towards the end of the line at Hackney Wick.

Here you may get a chance to talk to driver Gregory Greene from George-town, Guyana, who has been guiding the 236 along its merry path for 11 years; or Hulia from Turkey, who took up bus driving recently as her children have grown up. “They tell me, three months you gonna hate it; six months, you gonna hate it.  It’s now eighteen months, and I love it.”   And with such a happy captain at the helm, you can’t really help but love it too.

← Listening to local voicesThe summer sails are on →