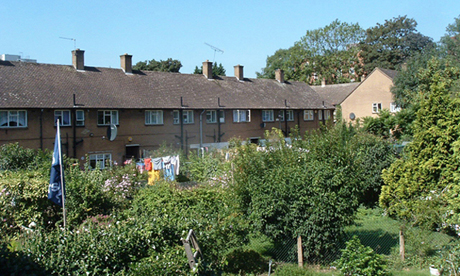 Woodberry Down homes with gardens, due for demolition

In January of this year Robin Smith announced a two-year delay in the regeneration of the Woodberry Down Estate. Smith, the programme’s director, announced: “The economic situation has delayed the start in building the new homes, which were to be entirely ﬁnanced by private house sales.”

While the statement was hard to spot amongst the colourful pages of “good news” in Hackney Homes’ Woodberry Down Regeneration newsletter, the implications of Robin Smith’s words were troubling.

The Woodberry Down estate is to be subject to one of the largest regeneration schemes in Europe, with the proposed demolition of 1,458 social rented homes and building of 4,328 new homes. Only twelve more socially rented houses will be built as part of this massive expansion.

The rest are to be developed and sold as open market properties through the Council’s private partner Berkeley Homes in an effort to make the regeneration project pay for itself. Due to the recent collapse of the housing market, Berkeley Homes was forced to put the development on hold indefinitely, resulting in Smith’s announcement in January.

However, Hackney Council revealed at its 2 March Cabinet meeting that the borough has secured a £16 million rescue package from the newly-created Homes and Communities Agency, a government body.

This grant package commits Berkeley Homes to go ahead this month with the development of 117 homes on the Old School Site of the estate, the so-called Kick Start phase of the project. Without it, the Council admits, the project could not proceed.

According to the Cabinet report: “A condition of accepting the grant is that Berkeley Homes must have ownership of the land on which the homes will be built. A transfer of ownership…from the Council to Berkeley is therefore sought.”

Recent developments will give little solace to the residents of Woodberry Down, who have been sitting in the planning doldrums for the past eight years.

As Klaus Graichen of Springpark Drive explained to the Hackney Citizen, residents have been given absolutely no indication of when they will be forced to move, yet the Council refuses to carry out any real maintenance or repairs on those buildings that are earmarked for demolition.

Neighbour Joyce Brady has been forced to use duct tape to keep out the draft from the fifty year old windows of her ground floor maisonette, which are in dire need of replacing.

“It’s been seven years already and it’s traumatic, we just don’t know where we are. I’m 75 years old if it’s going to be four years I could be dead by then.,” said Joyce Brady. “And there are things I need – I need a new carpet, but I’m not going to spend money on it to tear it all up again,” she explained.

Situated on prime real estate overlooking the reservoir and mostly occupied by pensioners, these houses will be among the first to go, but no one, least of all the residents themselves, has any idea when.

“Every time we have a meeting there are new faces to talk to, the plans are always changing, there have been about three or four different Masterplans,” explained fellow resident Ray Henry.

“We’re in a limbo you cannot get anything from them about where we would be moved to or what the rent would be,” he continued.

Even though the first phase of the development is earmarked to go ahead this month, progress is still subject to legal issues that may arise from the government bail-out to Berkeley Homes.

The Cabinet report outlined the high level of financial risk in planning and legal costs – up to £8.5 million – that the Council could face should these latest plans again fall through.

Whilst Deputy Mayor Karen Alcock has made a statement assuring residents that the Woodberry Down development is a “20-year scheme” and that it “will continue with or without an economic downturn”, this is little reassurance for those residents who may spend the rest of their lives in anticipation of the upheaval of their homes and community.

More on the history of Woodberry Down Estate from the Hackney Podcast:

← A licence to print money?Communities under siege? →