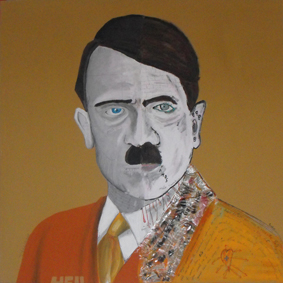 A BLEEDING Christ; the Pope; Hitler; Mother Teresa; Edie Sedgwick; and Alfie Patten (the 13 year old father). There is plenty to excite or rouse in the latest exhibition at WW Gallery.

Artist/curators Debra Wilson and Chiara Williams have been attracting considerable attention, no surprise as when I arrive at the gallery at dusk, a Christ figure is suspended in the front window. INRI by Jonathan Batten drips blood into a font, he is fully naked and not nailed to the cross, but tied up with puppet strings.

The shifting ground of the familiar and unfamiliar starts here and is at the very core of the show itself. The PG film classification was the starting point for Wilson and Williams, who decided to simply flip the traditional roles of the parent and the child.

But as with every exhibition these two undertake, the proceedings have grown darker, funnier and more subversive. Williams explains “The show’s about role models in general – whether they are heads of state or religious leaders – the impact they can have and how morals are imposed: good and evil, love and hate…and knowing Reich from wrong”, jokes Wilson, adding “Some scenes may be unsuitable for parents!” 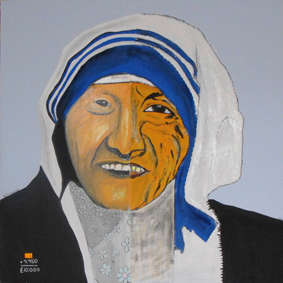 Which brings us to Sardine and Tobleroni in the upstairs part of the gallery. These are two artists whose humorous approach involves each painting half of the canvas simultaneously.

Their portraits of Hitler (Heil) and Mother Teresa (£10,000) are cast in the extreme roles of feared father figure and caring mother figure. Hitler hangs to the left, signifying that he is bad, while Mother Theresa on the right, is good.

Between these two figures plays Dear Father, a short film by Anita Makris that chronicles a young girl’s troubled relationship with her father, with God and with the convent in which her mind is confused and filled with fear. To make matters worse, Phil Illingworth’s Pope watches over your shoulder.

Downstairs, ‘A Semi Hardy’ by Boa Swindler bears the words: ‘The Queen launched her label and a style was born’. It presents the monarchy as an old-fashioned, worn-out institution reduced to mere nostalgia. The title is an anagram of Sir Hardy Amies, dressmaker to the Queen. 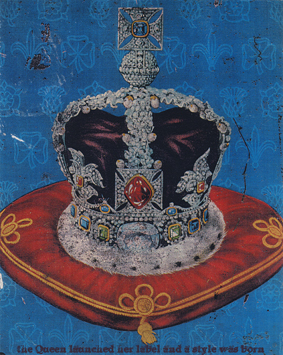 As you walk through the gallery’s spaces, you shift between the public and residential, the professional and personal. There are several reminders of the domestic, but their treatment is anything but what you’d expect – dolls with souls, a tattooed toilet seat, a miniature flesh-coloured bathroom covered in hair.

Positive/Negative Polarities of Woman is the title of a bar of soap that resembles a breast. Sitting in a soap dish mounted on the gallery wall, this surreal piece by Eva Lis functions on the axis of attraction and repulsion, like so much else in this exhibition.

As I leave the gallery, it has grown dark. I step onto the quiet residential street and turn around for a final look. There it is again, on this black night, in a huge Victorian bay window: the Christ figure.  I am left feeling disturbed, surprised and happy at what I have discovered here and look forward to the next exhibition, for which WW Gallery will be travelling to the Venice Biennale.