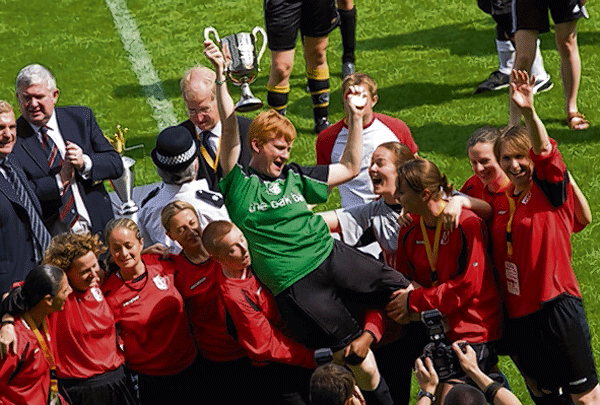 Sung to the tune of ‘Amarillo’ by Tony Christie, these are the words you might find yourself chanting on the sidelines of a Hackney Women’s Football Club match. The lines are not the mere hyperbole of a football chant – Hackney WFC do have trophies.

In fact they fended off women’s teams from around the world to become champions in this year’s International Gay and Lesbian Football Association World Championships. Both their first and reserve teams are doing well in the London leagues, and they are set to play in the next IGLFA cup in Washington DC in 2009.

Established in 1986 as the first completely women-run club in London, Hackney WFC has always done things its own way, a trait which has led to its success and reputation as a team with resolve. “Because we’re so close, even when we’re losing a match, we’ll fight till the end, right to the last whistle. We’ve been noted by referees for that spirit,” says Club Secretary, Cat Harrison, talking at their training ground at Wood Green.

Members of the team agree that this stems from the right mix of rigorous training and a strong social element typified by regular post-match drinks and events. “We’ve got the best of best worlds…a two-pronged attack if you like. It’s a very strong devotion to both football and socialising!”

The mid-1980s, when HWFC was established, were difficult days for women’s football. Only 15 years before, in 1971, the FA had finally lifted a ban on women playing since the days of World War One when Dick, Kerr’s Ladies’ team were attracting 50,000 spectators to their matches in Liverpool. The founders of HWFC felt there was a need to create a safe space for women – especially gay women – to play the sport in Hackney.

The club was the first predominantly lesbian team in London, and possibly even the UK, and nowadays prides itself on a completely inclusive culture, so that all women are encouraged to join and play regardless of skills, age, ethnicity or sexual orientation. Attracting players across the borough and beyond, any woman can expect to be welcomed on joining the club.

Over the years, Hackney WFC has built up a network for women footballers. Jackie Pidcock, goalkeeper and member since 2003, describes how the club provides a supportive environment: “From improving health and fitness, to the emotional and professional support of friends – in every respect there’s always going to be someone in the club you can turn to.”

At a time when football is the fastest growing sport amongst women in the UK, but funding remains stagnant and mainstream media coverage almost non-existent, Hackney WFC represents a positive local response by simply encouraging women to get involved.

Jackie sums up the practical approach, “Even if you’ve only kicked a football once before when you were five years old, the club will offer you training and a game on Sundays. It gives women more confidence and skills to play.”

Each year the club enters a seven-a-side tournament to which players who have long moved away always come back to play for Hackney. “Once you’ve been a Hackney girl, you’ll always be a Hackney girl.”

← At home with Iain SinclairBrown gold →