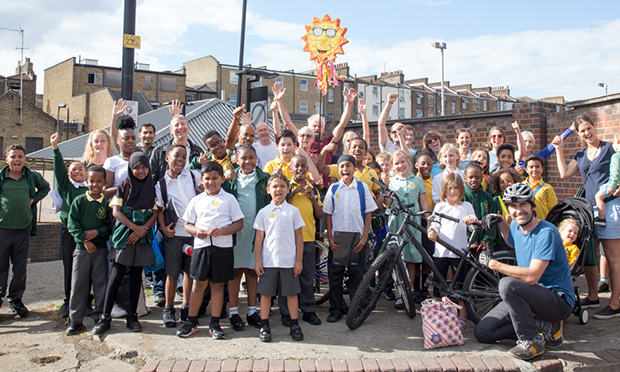 Blame it on the sunshine: supporters celebrate the court’s decision. Photograph: Bex Wade

A controversial decision by Hackney Council to approve a private development that would overshadow Colvestone Primary school’s playground was last Friday (9 September) overturned by a senior judge in the High Court.

The news is a victory for campaigner and Colvestone Crescent resident Judith Watt, who fought a bitter 12-month campaign against the council’s decision.

In September last year Hackney Council’s planning officers gave the go-ahead to proposals by developers Chan & Eayrs to throw up a three-storey block of flats and a café, whose 9.5 metre-high wall would block light from the next-door school playground.

Ms Watt, who does not have children at the school, launched a judicial review out of her own pocket in October.

She told the Hackney Citizen: “I’m grateful that planning permission has been revoked but the case should not have been necessary.”

Money down the drain

Hackney Council has been accused of “pouring money down the drain” after spending a year defending its planning decision, which was based on “misleading” information on overshadowing provided by the developers.

It had commissioned a daylight expert, Twenty16 Design, to assess how much of the playground would be in any kind of shadow if the building went ahead.

But in the computer model, a fence was drawn around the playground in place of a two-metre brick wall, which would let in much less light. 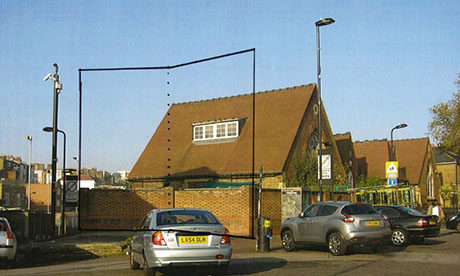 Blocked in: an outline of the proposed back wall. Image: Hazel Mew

Watt pointed out the error in person at the planning sub-committee in September 2015 and the Head of Nursery had already submitted two written objections.

She said: “It has been obvious since the beginning that their decision was based on deeply flawed information.”

In his judgement, Justice Gilbart said: “The Twenty16 assessment was treated as being authoritative by the officer in his advice to the committee.

“In my judgement a misleading picture (albeit without any intention to mislead) had been created, to the disadvantage of the objectors (including the claimant) on a critical issue.

“In the winter months [the area] would be in more shade, and in some part of that period entirely in shade.”

Watt added: “Why did Hackney Council pour all this money down the drain? If they had paid attention sooner this would have saved everyone a lot of time and money.”

“If the developers want to redeem their tarnished reputation, they should either design a building that doesn’t steal sunlight from little children for private profit or they should donate the land back to the school for more much-needed outdoor learning space.” 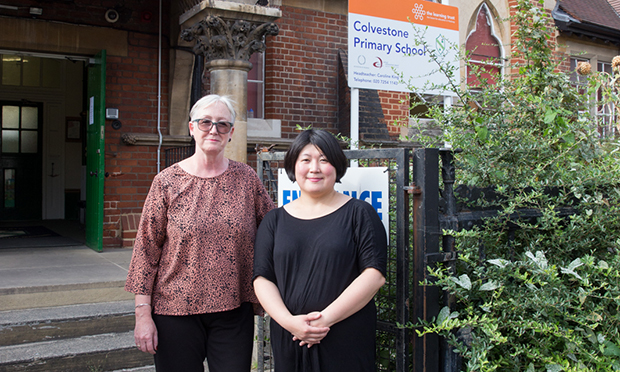 Ms Watt has been hailed as an “environmental champion” by her solicitor, Bill Parry-Davies, who also runs OPEN Dalston, a heritage campaign group. He praised her for fronting money to pay for an initial independent expert report and pursuing the lengthy and high risk court proceedings.

He said: “Without determined people like Judith to challenge poor decisions, inappropriate development schemes would blight our communities. She fought for the wellbeing of future generations of children. Adequate sunlight is like a human right – it is essential to physical and mental health, especially for children. Indeed, sunlight is essential to life itself.”

“The case set a useful precedent where a developer’s advice has misled a committee, innocently or otherwise. It also confirms that the particular effects of overshadowing always needs careful examination because, even though official guidelines might be met, they are guidelines only and not rules to be applied regardless of the actual impact.”

Mami McKeran, mother of two children at the school and a local resident, said: “I am delighted by today’s judgement. It is unfortunate that it has taken a legal action – which has come to a great financial and personal cost to Judith – in order to put right the failings of Hackney Planning Department.

“I have never been opposed to the redevelopment of the small land next to the school nursery. The land should be developed – but with a building limited in height to ground level in order to safeguard the sunlight for future generations of Colvestone’s nursery children.

“I urge [the developers] to engage in a constructive dialogue with the Learning Trust, the members of the school community and the local residents, which [they] had failed to do previously.”

Ms Watt had hoped that a historical covenant written into the deeds of the land – which protects the school’s right to “uninterrupted and unheeded access of light and air” – would aid her argument. But as the proposed building would cast shadows over the school’s outdoor space rather than its windows, it was deemed not to have enough of an effect for the covenant to apply.

A spokesman for Hackney Council said: “After the council’s planning committee granted planning consent, it was found that evidence from the developer regarding the restriction of daylight was inaccurate. This is an unusual case but as with any judicial review, a barrister was appointed as a matter of course.”

Chan & Eayrs were approached for comment but had not responded by the time of publication.