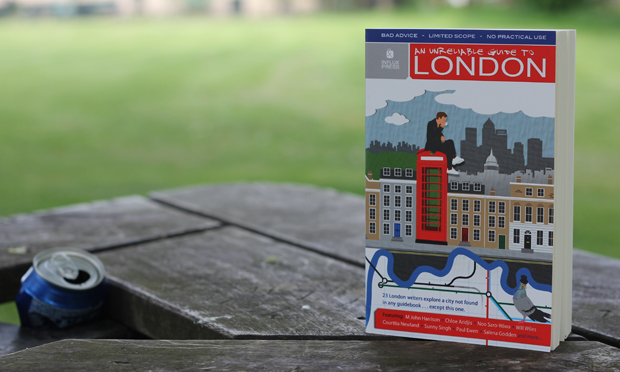 An Unreliable Guide to London looks and sounds like a bit of a gimmick. The title positions it as a humorous alternative to the city’s latest Lonely Planet publication, while the front cover – laden with hackneyed London graphics and brandished with the tagline “bad advice – limited scope – no practical use” – is the type you might expect to find attached to an unwanted stocking filler. The content, however, is of an altogether different nature.

The idea for the collection, which contains more than a few exceptional stories set in some of the capital’s lesser-known locations, arose during a conversation over meatball subs at a Tottenham retail park. Editors Kit Caless and Gary Budden of Influx Press sat together wondering why publishers weren’t printing books about the parts of London they knew and interacted with on a daily basis. “What novels had we read set in Hanwell, Cricklewood or Barking?” they asked.

Inspired, they brought together 24 diverse contributors from across the city, before launching a successful Kickstarter campaign to give new literature to a London “that exists on the periphery of the imagination”.

An Unreliable Guide… is divided into four sections – West, North, South and East (in order) – and draws on areas as far apart as Wormwood Scrubs and Exmouth Market, and then further again. Aki Schilz gets the collection off to a great start with “Beating the Bounds”, but it’s Eley Williams’s bizarre and brilliant “In Pursuit of the Swan at Brentford Ait” that really sets the work alight.

Williams delves into the rich, ambiguous world of cryptid research, painting a mythological history of an over-grown swan believed to have long terrorised local riverbanks, with a plumage reported to be “dim smoky purple or a vivid electric pink”. She describes Brentford FC football chants that pay credence to the beast and details umpteen dangerous encounters stretching back centuries. It’s a stunningly strange tale.

Budden’s own “Staples Corner (and how we can know it)” – about a trip on the 266 to Currys and PC World, dropped off amid a “web of underpasses and roundabouts, of concrete walkways and steps to nowhere… trapped in the fevered dying dream of a brutalist architect” – is another of West’s highlights, while Chloe Aridjis kicks off the North section with an evocative exploration of night, shadows and optical illusions in N1.

Though M John Harrison’s “Babies From Sand: A Guide to Oliver’s Island, Barnes & the St Margarets’ Day of the Dead” is one of the weirdest, most-inspired pieces of short literature I’ve come across in a while, it’s the assemblage from East that is, for me, of most interest (primarily because I know the territory so well).

The poet Tim Wells lyrically laments the loss of wanker-free record stores in Hackney, where back in the day he’d purchase reggae, drink beer and chat with mates, before moving on to get his fill of pie, mash, liquor and slippery eels at Cooke’s on Kingsland Road. Nikesh Shukla makes fine work of Tayyabs, the famous Whitechapel curry house, while Irenosen Okojie brings a dizzying, Borges-like tale of time travelling monks to Barking.

As if that’s not enough, Marshman Gareth E Rees delivers a typically fun and enlightening account of a walk around Leyton Mills Retail Park – the car park, specifically – and co-editor Caless finishes things off with a probing series of politically-loaded vignettes dedicated to the forces tugging away at Exmouth Market; there’s spiced lamb, adulterous office sex and a bronze bust of Vladimir Lenin.

Despite appearances, An Unreliable Guide to London is a formidable anthology of top-notch city writing.