Hackney is built on clay. More than that, it is largely built of clay.

“This was pretty much dug straight from the ground and baked into bricks,” observes Sarah Hall, a mentor at Hoxton ceramics studio Turning Earth, pointing to the inner wall of the 19th century railway arch that houses her place of work.

“They won’t have wanted to put any costs on the production, so they’d fire the bricks close to where the clay was dug.”

Bricks aren’t the end of it, of course. In front of Hall is a curvaceous, high-sided bowl, standing among distinctively formed coffee mugs and jars, with a background of tiles in earthy tones, all made from the same stuff as the bricks by potters using the wheels, tables and kilns at Turning Earth.

“We’re an open-access studio space,” explains Hall. Members pay a fee and get access to facilities and mentors in return.

Members include professional ceramicists, recent graduates and some absolute beginners, as well as a couple of designers and architects looking realise an idea in clay and give ceramics a spin.

Wheels, explains Hall, are the most well-known of potters’ tools, but other techniques are available.

‘Slip casting’ means making a plaster mould of the shape you want and pouring in liquid clay. 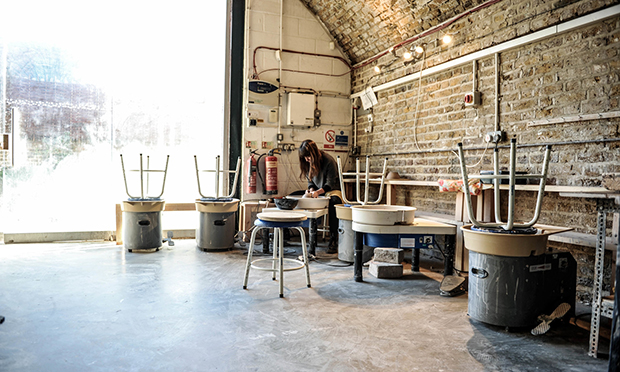 The plaster sucks moisture from the clay, gradually building up a hard layer around the edges.

Once this is thick enough, you pour out the liquid clay and you’re left with a solid clay shape. Genius. ‘Hand-building’ involves manually shaping the clay, either by rolling it out like pastry or forming little sausage shapes to be built up into a larger form.

Moulds can be used too. Hall points out one of the members who looks like she’s engaged in a complex act of millinery, smoothing light-orange material over a round mould, occasionally warming the clay gently with a hairdryer.

This helps moisture leave the clay in a slow, uniform way – avoiding it being vaporised when later placed in the 1,000°C plus temperatures of the kiln, which would cause the bowl, hours in the making, to crack or even explode.

Turning Earth’s kilns are giant tubs lined with electric elements and built from fire-brick, which looks like polystyrene but is capable of withstanding frightening temperatures. The heat changes the clay chemically, so it can’t go back to mush. 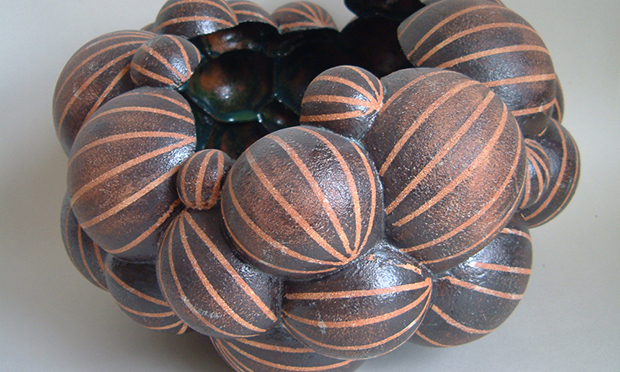 This gives you a solid but still porous material (think of bricks soaking up water on a rainy day), which a 1250°C second firing vitrifies – ‘converts into glass or a glass-like substance,’ says the Oxford English Dictionary – making it water-resistant (think bathroom tiles).

You can add a glaze before this second firing, which will bond chemically with the ceramic under the intense heat, and stick for good.

There’s growing demand for hand-made ceramics, both from restaurateurs looking for something distinctive and hard-wearing for customers to dine off, and from ordinary folk who are willing to pay a small premium to escape the smooth all-whiteness of the Ikea-M&S-John Lewis crockery-interiors complex.

“Potters have this thing that your cup is the first thing you touch in the morning; you touch it to your mouth, it’s very personal,” reflects Hall.

“If you get pleasure out of that it’s quite a good way to regularly remember what you like about it.