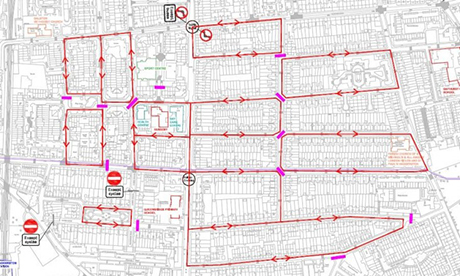 Round in circles: the council has changed its mind again about the cycleway consultation. Image: Hackney Council

In an embarrassing U-turn Hackney Council has backtracked over its controversial plans to trial a cycleway through London Fields without first running a formal consultation.

Succumbing to pressure from opponents of the cycleway, the Town Hall today announced it would postpone the three-month trial until after it has consulted with residents and local businesses.

“Due to very strong feeling on both sides and the high levels of public interest, the Council will hold a full public consultation, starting in January,” said Cllr Feryal Demirci, Cabinet Member for Neighbourhoods and Sustainability.

This will allow residents to have their say on a number of options, before any decisions are made.”

The climbdown is a victory for campaigners against the scheme, who feared it would simply force traffic down adjacent roads.

“Hackney Council has seen the strength and depth of feeling of the residents who were very angry about the way in which it did not consult with anyone other than its friends,” said Mike Hood, a Malvern Road resident who launched the Stop The Proposed Road Closures petition.

“That is very good news. Common sense has prevailed.”

If approved, the scheme would block roads around London Fields to through-traffic, allowing cyclists and pedestrians to travel freely down a ‘Quietway’ along Middleton Road.

Many residents were concerned that once the road blocks were in place, the council would be unlikely to backtrack on its plans.

This is the second time the council has changed its mind over the consultation.

Initially it discussed with residents the possibility of consulting before trialling the ‘London Fields Filtering Scheme’.

But following a ward forum in July the council announced it would launch a trial of the scheme in January next year, which would also act as the consultation period.

Aggrieved residents were angry the council had denied them the opportunity to consult before the trial went live, as they had previously been told they would.

“The entire process of this scheme has been haphazard, partisan and undemocratic,” said Mr Hood.

But not all residents opposed the scheme and today’s decision is a setback for those who supported it. Ben Alden-Falconer, who set up the Fume Free Streets campaign, said supporters of the cycleway scheme will continue to advocate for it.

“We believe that it will benefit the neighbourbood as a whole. We appreciate the Council has come under a lot of pressure to carry out a pre-trial consultation, even though a consultation alongside a trial is a valid and well used option,” he said.

“We hope that the outcome of the consultation is still a scheme that improves cycling infrastructure, while reducing motorised through-traffic and its associated noise, pollution and danger.

“Hopefully the additional time will allow the council to engage with the wider community, refine plans, and build a scheme the majority of residents are happy with. It might even mean a trial during a warmer time of year when residents can see the benefits of pedestrian- and children-friendly streets more clearly.”

The council will announce further details about the consultation at a public meeting at Hackney Town on Monday 14 December.

This article was updated at 5pm on 8 December with comment from Fume Free Streets.