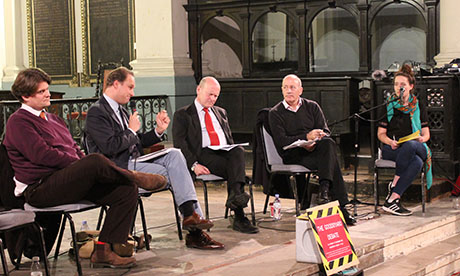 Plans to build towers up to 46 storeys high full of luxury flats have been branded “an obscenity” by Hackney’s mayor, Jules Pipe.

At a packed public debate Mr Pipe slammed the Bishopsgate Goodsyard developers for failing to include sufficient affordable housing in their plans.

“They are willing to do it [the development] because they will make an obscene amount of profit,” he said.

The debate, which took place yesterday evening, was hosted by campaign group More Light More Power and the Hackney Society.

The panel was made up of Hackney’s mayor Jules Pipe; the Mayor of Tower Hamlets, John Biggs; Jonn Elledge, the editor of CityMetric; and Nicholas Boys Smith, founding director of Create Streets, a social enterprise that promotes low-rise developments.

“London is going to come to a grinding halt because we cannot afford to house the people we need to run this city,” warned Mayor Pipe.

“This will provide not a single home that would be within reach of people who work in Tech City. We think the developers could do much better to provide space for them.”

Nick Perry, of the Hackney Society, said the developers’ plans were not worth considering unless they contributed more to the local community.

“The proposal delivers no school, no community centre and hardly any affordable housing. If that’s the starting point then it’s pointless discussing the plans,” he said.

“Buying homes is not like buying milk. Simply supplying thousands of luxury homes is not helping the housing price situation in London. It will push prices up, not down.”

The Hackney and Tower Hamlets mayors also criticised London Mayor Boris Johnson for ‘calling in’ the decision on the proposals for the development around Shoreditch High Street, and bypassing both local planning authorities.

“There is a complete lack of accountability. Boris does not have a planning committee, he doesn’t have to make site visits,” said John Biggs.

“We need a far greater transparency if we are going to have democracy when it comes to planning.

“The problem is a precedent will be set once we have a development that’s that high (over nine storeys) – all the developers will say they want to go that high too.”

Boris Johnson was unable to participate in the panel debate as he is now the the planning authority. Taking part could be seen to be prejudicing the decision.

A spokesman for London’s mayor said: “Bishopsgate Goodsyard, which has stood derelict for over 50 years, is the biggest site around Tech City in east London and would create hundreds of jobs and homes for Londoners.

“The Mayor has decided to call in the application and will consider all of the planning issues before taking a decision in due course.”

The Hackney Society also invited a representative from the developers, Hammerson and Ballymore, to participate in the debate but they turned down the invitation.

A spokesperson for Hammerson and Ballymore said: “It originally appeared that the organisers were genuine in wanting to create a debate where all parties could present their points of view.

“However, subsequent media and social media coverage promoting the event has indicated that it had become an anti- Goodsyard rally, to follow on from the demonstration that took place on Sunday.

“We remain very happy to meet with individual community groups as we have been doing over the last two years to explain the details of the scheme and answer any questions. But we will on this occasion decline to take part in the event.”