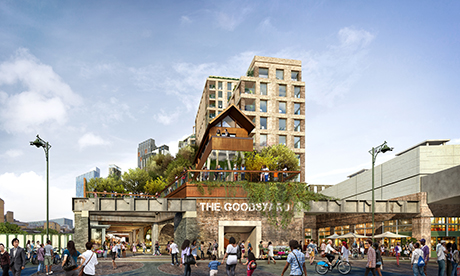 The £800m Goodsyard scheme has been “called in” by the Mayor of London – the second controversial development to be brought under his jurisdiction in a week.

The Mayor’s has decided to “take over” as the planning authority, and will now have the final say on Hammerson and Ballymore’s application to turn the derelict Shoreditch site into flats, offices and a public park.

The intervention follows City Hall’s announcement that British Land’s contentious proposals for Norton Folgate in Spitalfields would be decided by the Mayor, despite being thrown out by Tower Hamlets council in July.

David Donogue, a campaigner opposed to the Goodsyard scheme said the upcoming London Mayoral elections meant “developers are in a state of panic” at the thought of a successor who might be less sympathetic to their applications.

“We’re well aware the developers are in a state of panic because Boris is off in May and they feel they can rely on him to support their schemes. A new Mayor is going to be much more questioning, we think.”

Despite the Goodsyard proposals being registered over a year ago, Hackney and Tower Hamlets councils have not yet made a decision.

Following a request from the developer, the London Mayor has taken the decision to step in on the grounds of non-determination.

Earlier this year, the developers responded to widespread opposition to their plans with revised designs – shaving storeys off the height of four of the towers and the number of residential units from 1,464 to 1,356.

But the Mayor of Hackney Jules Pipe did not hide his disregard, blasting the changes as “superficial tinkering”.

Director of the Hackney Society Nick Perry, who has campaigned against the level of affordable housing in the Goodsyard proposals, said the developers had played a “strategic game”.

Perry said: “By engaging the boroughs in meaningless (and secret) negotiations with no intention of making the sorts of compromises the scheme needs they have handed Boris the excuse he needs to add this scheme to his impressive legacy of unaffordable homes and unachievable promises.”

A spokesman for the Mayor of London said: “More than a year ago an application was submitted to the local authorities and a formal request has now been made to the Mayor to take over as planning authority.

“Bishopsgate Goodsyard, which has stood derelict for over 50 years, is the biggest site around Tech City in east London and would create hundreds of jobs and homes for Londoners.”

Donogue added: “It’s not true democracy if the mayor makes a decision without all the nuances that you get from real local representation.”