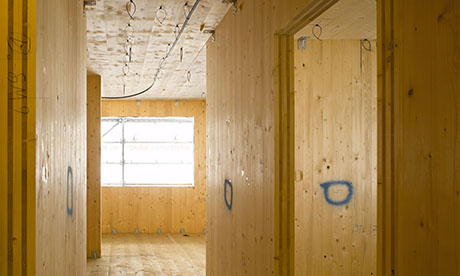 The inside of a CLT building on Murray Grove in Hoxton . Photograph: Will Pryce

Above the Overground line that runs along the south side of Ridley Road Market, a landmark new development is slowly rising out of the dirt that could point the way toward answers to both over-consumption/global warming, and London’s housing crisis.

The particular record about to be broken – “the UK’s largest cross-laminated timber residential building” – is on the face of it, not one to set the pulse racing.

But with this development Hackney is quietly positioning itself at the forefront of a revolution in urban housing architecture.

Cross-laminated timber, or CLT, is a dense and strong material made from layered, glued wood, sturdy enough for use in high-rises. CLT also boasts a much smaller carbon footprint than an equivalent in concrete.

CLT is also flame retardant, offers good energy efficiency, and is quicker to build with

The Dalston Lane development by local architects Waugh Thistleton is the second record-breaking CLT development in Hackney after the Stadthaus, built in Hoxton’s Murray Grove in 2009, the tallest CLT structure in the world at the time of completion. So it’s not without reason that Hackney was recently described as a world leader in urban housing architecture. 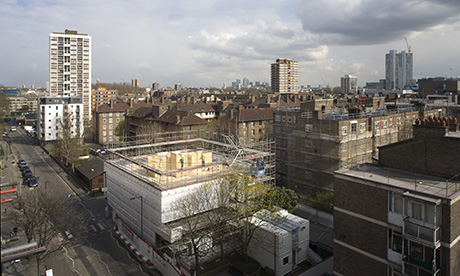 The Murray Grove residential tower being built. Photograph: Will Pryce

Andrew Waugh, co-founder of Waugh Thistleton, believes that CLT is going to change the face of architecture, placing sustainability and environmental responsibility at the top of the agenda: “We are, as an industry, addicted to concrete. All the solar panels we buy, though important, are put into perspective by the massive carbon footprint caused by concrete production.”

In general, Waugh estimates, “the building materials alone, for a new build, make up 50% of that building’s carbon footprint across its lifespan”.

By this measure, the Dalston Lane development will save almost 2,500 tonnes of carbon by using CLT instead of concrete. Due to their relative mass, as Andrew Waugh describes, “if you need 100 trucks of concrete for a concrete building, you’ll only need 10 for an equivalent in CLT”, leading to more savings in terms of emissions.

And it’s not just on Dalston Lane. There are currently 24 CLT buildings completed or under construction in Hackney, including work at five schools and the new Frampton Park Church building.

Waugh’s firm was the first UK architects to use CLT. In 2003, they approached Hackney Council to point out the benefits of using it. The council’s response was to host a conference about timber construction – the first time any London borough had seriously engaged with the idea.

A driving force behind the Council’s support is Vincent Stops, chair of the Council’s Planning Committee. He remembers the timber conference as a key part of Hackney’s success today: “People went away knowing that Hackney supports timber. We can’t legislate, we can’t tell people what to build their buildings out of, but we can, as an organisation, say: ‘we like wood’”. 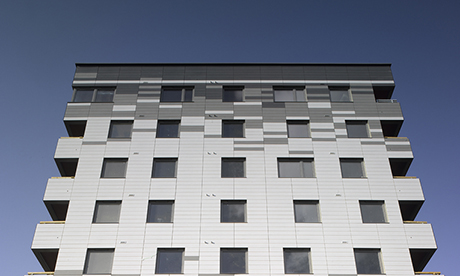 Waugh praises the council’s forward-thinking approach: “It takes a lot, for a local authority like Hackney to go out and lead the way completely on their own.”

Waugh firm isn’t the only architect in Hackney to have fallen for CLT.

Barbara Kaucky, director and founder of Erect Architecture on Andrews Road, says: “It’s true that potential pitfalls to be aware of when specifying CLT would be its mediocre acoustic, security and of course fire resisting performance.

“But we found the product literature and technical support offered by our supplier to be good. We loved working with CLT.”

That there has been such slow take-up by other London boroughs is surprising, given CLT’s environmental benefits.

But Richard Blakeway, the GLA’s Deputy Mayor for Housing, Land and Property says that he “aims to ensure the highest standards of sustainable design and to improve environmental performance of new housing developments across London.”