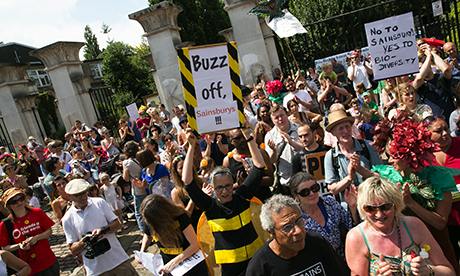 Supermarket giant Sainsbury’s has pulled out of plans to build a large store in Stoke Newington in a surprise twist to a long campaign against the Wilmer Place development.

Members of the Stokey Local campaign group realised the long-running battle against Sainsbury’s had been won after spotting that the supermarket’s name had been removed from the Wilmer Place lease.

A Sainsbury’s spokesperson confirmed the exit, saying: “We assume the developer will continue with their plans for a housing and retail scheme, once the latest legal challenge has been resolved.

“In the meantime, we will be focusing our attention on our Sainsbury’s Local, which remains extremely popular with our customers.”

The confirmation made it a rollercoaster week for the campaigners, who were left “downhearted” after failing to win the legal battle against the Town Hall and its granting of planning permission to the developer Newmark Properties.

In one final “cruel blow” for the campaigners’ case, a judge decided last week that an appeal against a previous High Court judgement would be unlikely to succeed.

Stokey Local’s Nick Perry said: “For some supporters this was only ever about Sainsbury’s, but for most of us it was about so much more. Nonetheless the exit of Sainsbury’s, who signed a lease long before the plans were made public, marks a turning point.

“It sends a strong message to all large retailers – you can’t cynically put stores anywhere you want just to grab market share and ignore the harm it causes.”

Another Stokey Local member, Andrew Harrison, said that although the campaign might have suffered a “disheartening loss” in the High Court, it has managed to win another way.

“The legal fight has gone down to the wire. But it seems that by sheer tenacity and by sticking to it, we may have achieved what we set out to do,” he said.

Stokey Local had hoped that extra evidence which arose from their complaint to the Information Commissioners Office (ICO)  – the body which regulates requests made under Freedom of Information (FoI) and Environmental Information Regulations (EIR) – might help persuade the judge to grant an appeal.

In communications with the ICO, seen by the Hackney Citizen, Hackney Council admitted that an Officer’s Report given at a planning sub-committee meeting for Newmark’s second application was “misleading”.

The Officer’s Report said there had been an independent report commissioned to justify a low-level of affordable housing, when in fact no such report existed.

But to the disappointment of the campaigners, last week the judge ruled there was still no realistic prospect of the High Court decision being overturned. 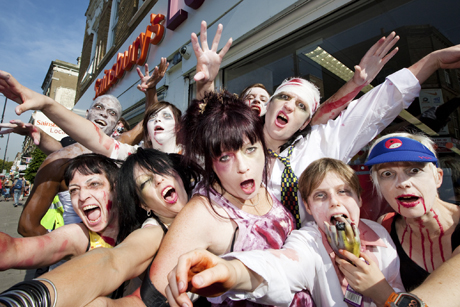 The ‘dead’ rise from Abney Park Cemetery to protest against the Sainsbury’s store. Photograph: Tim Sullivan

Perry said: “It’s hard not to come away from a long, and at times exhausting, legal battle where we’ve faced bad decision after bad decision and everything stacked against us, and not feel incredibly disheartened.

“But the truth is, this is still a victory for people power and a huge show of strength from a community angry at a council that apparently defends developers’ greed over the people’s needs.”

A Hackney Council spokesperson said: “Sufficient information was provided to the Planning Sub-Committee to consider the level of affordable housing proposed in the planning applications.

“The High Court and the Court of Appeal have subsequently concluded that the Council did nothing wrong in processing the applications, particularly in relation to the availability of information”

Questions remain over which retailer, if any, will fill Sainsbury’s shoes. Harrison said an ideal replacement would be an affordable housing scheme built by developers “sympathetic to Abney Park”.

“We can’t quite believe it’s game over. Shops opposite the Jolly Butchers have been cleared, signs have gone up so something is happening. If it is not Sainsbury’s, what’s it going to be?,” he said.

Newmark Properties have not responded the Hackney Citizen’s requests for comment.