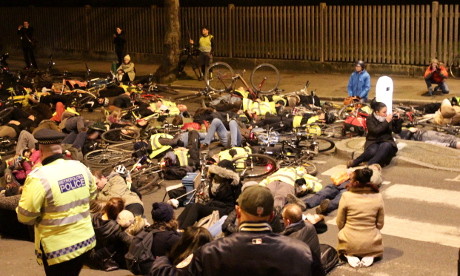 The family of a cyclist killed in a lorry crash in Stamford Hill have paid tribute to her “infectious spirit”, as hundreds of cyclists marked her death with a ‘die in’ demonstration in Stamford Hill.

Stephanie Turner was crushed by an HGV truck as she turned left on a notoriously dangerous junction where Seven Sisters Road meets Amhurst Park. She died from her injuries.

The 29-year-old physiotherapist, who had recently become engaged, lived two miles away in Tottenham Hale and was cycling to work when she was struck. 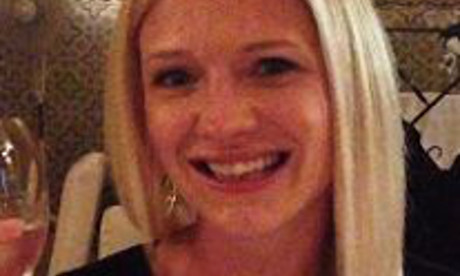 Paying tribute to Stephanie, her “devastated” family released a statement describing her as the “life and soul of every party” who “lit up every room she entered”.

“She ran marathons and climbed mountains. She was the life and soul of every party and lit up every room she entered. She was hugely admired by so many people for so many different reasons.

“To Steph, cycling was much more than a means of commuting. It brought her real excitement and satisfaction and allowed her to feel truly connected to London, the city she had come to love and live for. ”

“Stephanie was mercurial. She was one in a million. She was, as a close friend said, a pea from her very own pod. A huge hole has been left in our lives.” 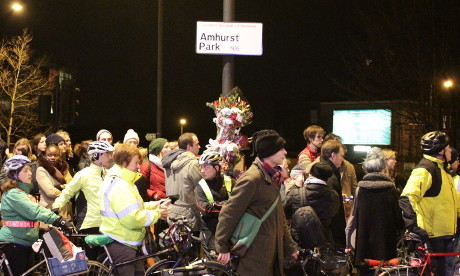 Cyclists gather at the crash spot on Amhurst Park

Campaign group Stop Killing Cyclists held a ‘die in’ at the crash spot, a form of direct action protest which originated in Holland in the 1970s where demonstrators lie on the ground with their bikes and play dead.

Police cordoned off the road as the cyclists wheeled their bikes onto the street and lay on the tarmac for two minutes of silence. 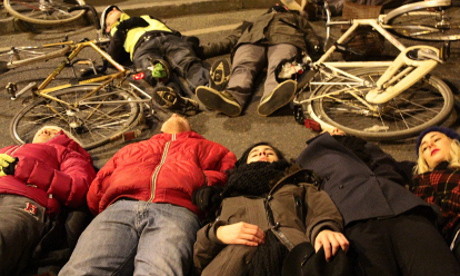 Sophie Gale, 24, from Walthamstow who was at her first ‘die-in’ said she found participating in the protest “very moving”.

Ms Gale said she had recently moved from Bristol where the difference in drivers’ attitudes towards cyclists was “striking”.

“The biggest things I’ve noticed are impatience, pushiness, and drivers taking a lot more risks. I’ve had really unfair confrontations. There needs to be a change in culture amongst drivers.”

Nicholas Fripp, 58, of Waltham Forest, who led a feeder ride to Hackney from Walthamstow said: “Anything that raises awareness is good. The deaths can’t go on.” 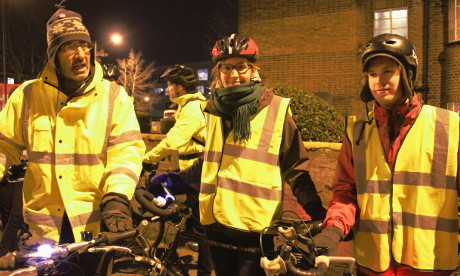 Nicholas Fripp, Sophie Gale and Joe Hemming at the demonstration

Addressing the large crowd, the Stop Killing Cyclists campaigners called on the Mayor Boris Johnson, TfL and the government to “do something” about the number of cycling deaths in the UK.

One organiser said: “We’re here tonight to hold a vigil to mark the death of a fellow cyclist Stephanie Turner at this place last week. Another one of us trapped in London by a lorry, another family that has to endure this tremendous loss of traffic violence.

“Crashes are still seen as unfortunate accidents rather than preventable collisions. We don’t have to let large trucks with blind spots on our roads, they are banned in other European cities. We can have segregated bike lanes that would have kept Stephanie safe.”

Co-founder of Hackney People on Bikes (HPOB) Natalie Gould said: “As a daily commuting cyclist, I wanted to pay my respects to the person who was tragically killed whilst simply going about their daily routine.

“Hackney People on Bikes believe that our main roads and junctions need to be made safer for all road users, and want to see a segregated network of cycle routes, which everyone in the borough feels safe using.”

Stephanie Turner was the thirteenth cyclist to die in the UK since the beginning of the year, and the first in London.

The 47-year-old driver of the lorry, who stopped at the scene, was arrested on suspicion of causing death by dangerous driving. He was bailed until April.