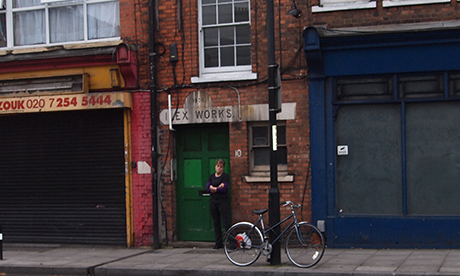 A tenant outside the Northwold Road properties. Photograph: Rob Whitson

Previously homeless tenants renting tiny studio flats above a rehearsal studio in Stoke Newington have been threatened with ‘revenge evictions’ after they complained about noise, the Hackney Citizen can reveal.

Tenants from 14 flats, some of whom were housed by a charity, are renting the seven foot by nine foot rooms at number 10 Northwold Road for £258 per week.

One of the purpose-built studios is so small that the toilet is situated inside the shower cubicle.

All the tenants are living in premises located above music rehearsal studios which the landlord and owner of the freehold, Mr Eliezer Schwarcz, also rents out from 10am until midnight daily.

One of the tenants, Ms Gail Stevens said: “The noise is so bad most nights it’s impossible … I just give up and cry myself to sleep.”

Another tenant, who wished to remain anonymous said: “Noise is a problem most days and evenings. I made informal verbal complaints about noise and the poor state of the property generally.”

But after complaining about the noise from the rehearsal studios below, residents were served with Section 21 notices and now face losing their homes just two days before Christmas.

This comes as a government-backed bill to stop revenge evictions is to be voted on in the House of Commons this week. Research by charity Shelter found that, last year alone, 213,000 people had claimed to be victims of revenge evictions.

Section 21 of the Housing Act 1988 requires landlords to provide tenants of an Assured Shorthold Tenancy (AST) with a minimum of two months’ notice in writing, stating that possession of the property is sought. A Section 21 notice must be served before possession order will be issued by a court. 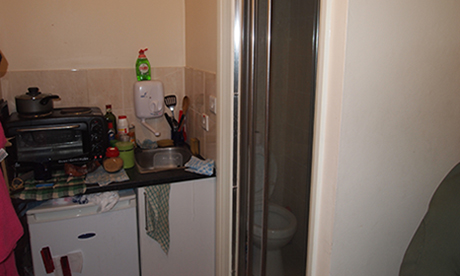 One of the studio flats: the toilet can be seen inside the shower. Photograph: Rob Whitson

Councillor Philip Glanville, Cabinet Member for Housing said the council was “investigating” the property at number 10. He said: “Ensuring private renters live in safe, good quality accommodation is one of our top priorities – the council has been in contact with the landlord of this property and is investigating.”

“We will continue to campaign on this issue and make the argument for better regulation, whether on retaliatory evictions or excessive fees, in London and nationally.”

Will Horwood, the Chief Executive of Two Step, the division of the charity Hope Worldwide that placed some of the tenants in the flats said that they were “at the mercy of the market”.

“We rarely find landlords willing to let a one bedroom apartment to our client group,” he said.

Mr Horwood said that Landlords typically charge the maximum Local Housing Allowance (LHA) rates set for the area and accommodation type. “Unfortunately, a landlord with studio flats can charge the same LHA as a landlord with one-bedroom apartments. This is a problem with the market and means many landlords opt for studio flats.

Following the eviction notices the charity said they would no longer refer people to number 10 Northwold Road.

Mr Horwood said: “We also reassured the tenant who contacted us that we would help him find alternative accommodation if he was made homeless for reasons that weren’t his fault. The same would apply to any of our clients who are made homeless through no fault of their own.”

Hackney housing campaign group DIGs said that revenge evictions were “rife” in in the borough and across the private rental sector. A spokesperson said: “The people worst affected are the most vulnerable people at the bottom end of the market.

“Not only is this landlord exploiting homeless people, he is also rinsing thousands of pounds a week from the public purse in the form of housing benefit.

“Landlords like this are not rare. When you have a completely unregulated private rented sector like ours, when the power of landlords far outweights that of renters, people are routinely exploited.

“Revenge eviction is entirely legal. The council can do very little to protect these renters. ” 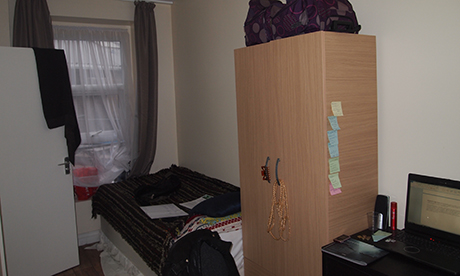 The interior of a £258 a week studio. Photograph: Rob Whitson

One of Hackney’s MPs, Diane Abbott, is supporting the The Tenancies (Reform) Bill which proposes to stop landlords from serving a Section 21 eviction notice if their tenants have complained about a serious health hazard or repair issue.

Mr Schwarcz was contacted by the Hackney Citizen but did not respond to questions regarding the tenants’ living conditions or the eviction notices.