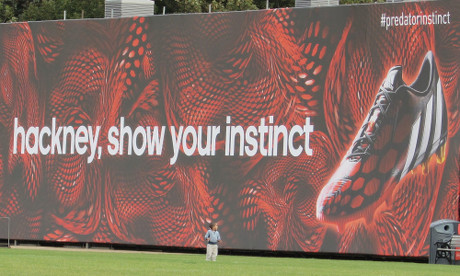 A £30,000 advertising deal between Hackney Council and sportswear corporation Adidas has been criticised as “grossly inappropriate”.

The 38m x 7.5m advert for ‘Predator’ football boots, emblazoned with the words “hackney, show your instinct”, has been erected over one whole side of the Marshes Centre.

The Council says that the money received for the advert – in place for four weeks – will be “injected” into the Youth Sport Fund and used to support future sporting talent in the borough.

However, environmental campaign group Save Lea Marshes are furious at the “irresponsible” advert .

They claim that the advert only received planning permission on the basis of it being “sensitive in size, scale and visual appearance”.

Caroline Day of Save Lea Marshes said: “It is totally unacceptable to be using the marshes for such grossly inappropriate advertising.

“As as a borough with one of the highest rates of child poverty in the whole UK, advertising trainers costing £170 a pair to the impressionable young people of Hackney is totally irresponsible.

“For one, Hackney Council only attained permission for the Hackney Marshes User Centre on the basis it would ‘respect Metropolitan Land’ designation. This advert patently does not do so.

“Cllr Vincent Stops has said there will be no planning enforcement on this matter, despite the advert only attaining permission on the basis of being ‘sensitive in size, scale and visual appearance’ and facing the car park!”

Local resident Sarah Miller, from Homerton, said: “I just think it’s disgraceful that a stunning, award winning building has been sold to the highest bidder to become a giant billboard, albeit temporarily.”

Ms Miller added: “At least it sounds like the money raised will be used for something worthwhile.”

However, not all users of Hackney Marshes are against the advert.

The Marshes Pavilion Community Group, a community group of parents and children who use the North Marshes to train and play competitive sport, said they were “delighted” at the promise of a cash injection for Hackney’s sporting youth.

One of the group’s members, Jonathan Bannister, said that generating revenue from the advert for children’s sport was “entirely appropriate”. He said: “As an organisation dedicated to bringing more children to regular, structured, sport we are delighted that Hackney managed to raise £30,000 to help develop children’s sport.

“Allowing a sports brand to advertise on a sports pavilion that serves one of the biggest concentration of football pitches in the country and to use the revenue to fund kids sport seems an entirely appropriate way to raise funds in a time of austerity.”

In a statement, Cllr Jonathan McShane, Cabinet Member for Sport and Leisure said: “At a time of severe government funding cuts – which has so far seen Hackney’s budget reduced by about £100 million and many councils cut services – it’s crucial we make the most of opportunities to generate revenue to help us keep supporting our residents.

The benefits of this extra money for Hackney’s young people will be felt long after this advert is taken down.”

A Town Hall spokesperson told the Hackney Citizen it is confident they have adequate planning permission for the advert, and are in the process of responding to the concerns raised by Save Lea Marshes.