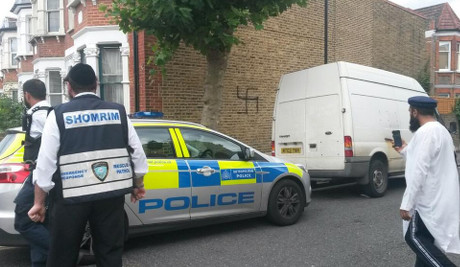 A total of 33 anti-Semitic incidents were reported in the borough between April and August this year – a sharp increase from the 12 cases in the same period last year.

The only London borough to top Hackney was Barnet, where reports of anti-Semitic crime have almost trebled, increasing from 14 cases to 40 this year.

The statistics reflect a surge of anti-Semitic crime across London, with 166 incidents reported in the capital between April and August compared to 62 last year.

The Community Security Trust (CST), a charity established in 1994 to ensure the safety and security of the Jewish community in the UK, told the Hackney Citizen there had been a “significant increase in antisemitism” over the Summer.

A CST spokesperson said: “There was a significant increase in antisemitism this summer, so these statistics are sadly no surprise given the size and visibility of Hackney’s Jewish community. Those who suffer such attacks should report them to police, CST or local support groups.”

Shomrim, the Jewish neighbourhood watch group, emphasised that the actual figure of anti-Semitic crimes in the borough is likely far higher than the police figures show – as many victims may avoid reporting incidents.

A Shomrim spokesperson said: “Hate crime of any kind is unacceptable, and it is of great concern when there is a spike of these incidents.”

“Under-reporting is still an issue that Shomrim members regularly encounter, more so, with victims of hate crime. Victims who experience such crime may feel humiliated and too embarrassed to complain.

Superintendent Andy Walker, from Hackney Police said: “We take all hate crime, including anti- semitic offences, very seriously and every incident that is reported to us is investigated by detectives from our specialist Community Safety Unit.  We also work closely with community organisations such as the Shomrim to drive down this particular type of crime.”