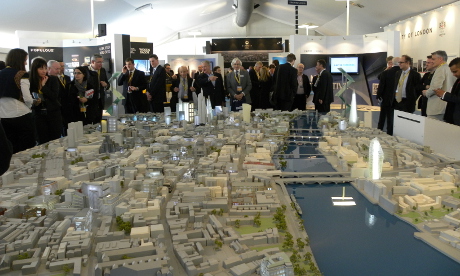 MIPIM UK, to be held in Kensington Olympia, is billed as the “number one show for the property trade market” and promises the attendance of over 3,000 “real estate players” including investors, developers and hotel groups.

Digs campaigners describe MIPIM as an event where local authorities and housing associations go “to sell off social housing estates and other public land.”

The campaigners have also criticised the attending developers for their “shocking” record of affordable housing provision, saying this is reflected in the title of a planned workshop called “Affordable Housing: Is it worth it?”

The Greater London Authority (GLA) and local authorities such as Croydon and Southwark have signed up to the show where Mayor of London Boris Johnson will give a keynote speech.

However others, such as Tower Hamlets and host borough Hammersmith and Fulham, have said they will not attend the event.

A Digs spokesperson said: “For too long, too many local authorities have rubbed shoulders with developers, an eye on short term profits rather than the housing needs of their residents.

“The champagne fuelled luxury of MIPIM is the world’s most disturbing mass-scale example of this.

“We congratulate Hackney and the other councils for taking a stand and saying ‘No’ to the profit-driven housing policies MIPIM represents. Let’s hope this signals a sea-change in the way councils relate to developers.”

Cllr Glanville said: “We’re not attending this event, because as a council we’re building our own homes for social renting and shared ownership, paid for by private sale properties, as our contribution to help tackle the housing crisis, as well as creating our own lettings agency for private renters on low incomes and in housing need.”

MIPIM UK said it welcomed “open, considered discussion on all topics relating to UK real estate” and that delegates from across the UK property industry, including local authorities had registered to attend.

A spokesperson said: “The inaugural MIPIM UK will provide a platform for public and private sector decision makers not only to do business, but also to discuss the future needs of the UK cities and regions and the needs of those that work and live in them.