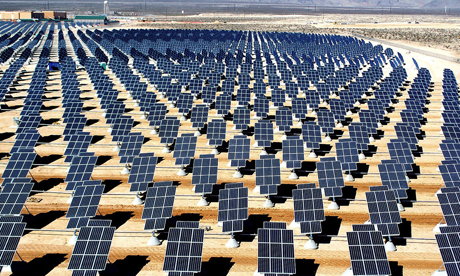 A fifth of London’s electricity supply could come from solar power, according to a new report commissioned by Green London Assembly member Jenny Jones. Yet the capital has the lowest uptake of the technology of anywhere in the UK.

Perversely, London is beaten into last place by both Scotland and the North East, in spite of the fact that these areas get much less sunshine.

Just one in 260 London households has solar panels on the roof, compared to the UK leader, the South West region, where one in every 32 homes generates its own solar power.

London’s 13,000 installations could meet the annual electricity needs of 12,000 houses, while on the other side of the country, the South West’s solar panels can supply the equivalent of some 110,000 homes.

Hackney is in the bottom 10 in London for the number of solar panels per household, with just one in every 441 dwellings generating its own solar energy. Waltham Forest comes out as the clear solar star, while Tower Hamlets finishes in last place.

Solar photovoltaic (PV) cells capture the sun’s energy and convert it into electricity. They still work on a cloudy day, although the stronger the sunshine, the more energy produced.

An average system for a domestic property will set you back between £6,000 and £7,000, with the cost falling all the time, but it should generate enough electricity in a year to power a typical household.

And under the Government’s Green Deal, people that choose solar can get cash back for their investment.

So why can’t we keep up? Germany, where the climate is not dissimilar from the South of England, recently surpassed its own record of generating 50 per cent of its energy from the sun. Here, the focus has been on community, commercial and industrial installations over domestic.

The Greens argue this should be London’s focus too, just like the installation on Blackfriars Bridge that produces enough solar energy to power 333 homes all year round.

“We need a City Hall team who can visit residents in flats, community groups, or business with advice and kick-start support,” Jones says. “We need to harvest solar generated electricity from the underused and empty roof tops of London’s commercial and industrial businesses, supermarkets, car parks, schools, transport and public buildings and other spaces.”

London’s first community energy project was set up by Repowering London in Brixton, emerging from one of the ten ‘Low Carbon Zones’, which were dropped by the London Mayor in 2012.

Repowering London is now supporting Hackney Energy, the first project of this kind in the borough, which is due to go live in the
coming months.

“London has enormous potential for solar,” Millie Darling, chair of Hackney Energy, says. “On my cycles around London I look up to see rooftops all around that could play a part in powering our city.”

“London has an important role to play in leading the way in the world’s transition to renewables,” she adds.

Hackney Energy is also working with Repowering London to set up the borough’s first solar energy co-operative, planned for the Banister House estate in Homerton, whose large, flat roofs make them ideal.

The project will be funded via a community share offer, which both local residents and non-residents can invest in. All income created by the electricity generated will go back to co-operative members and into the Banister House Community Fund for energy efficiency initiatives.

Meanwhile, Jenny Jones is calling on the Mayor to develop a London-wide solar strategy, with targets in place by the end of next year.

← Before Kingsland Road: the history of Turkish barbecueHackney Marshes debate: To build or not to build? →