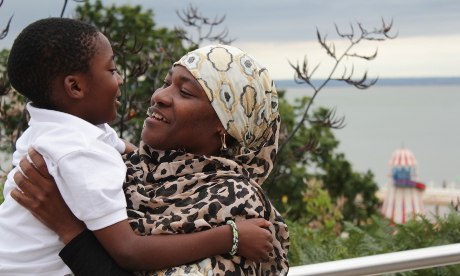 No way out: Rahina Yakubu and her son in Southend on Sea. Photograph: Ella Jessel

After years of suffering in an abusive marriage in Ghana, Rahina Yakubu escaped and sought a new start in Britain.

For 12 years, Ms Yakubu has lived in Hackney with her two children aged six and ten. A visa overstayer, she was eventually granted limited leave to remain in the UK.

But after losing her job she became unable to keep up rent payments and was evicted from her flat by court bailiffs last month. She then became homeless.

“My daughter goes to school and she tells her teacher not once, not twice but three times that she is scared and that she doesn’t want to be evicted from her home and have to sleep on the street,” said Ms Yakubu.

But for her and those like her, who have the ‘no recourse to public funds’ (NRFP) status stamped onto their visas, there are no government benefits or funding to fall back on.

Instead, Ms Yakubu and her two children have been forced into taking “interim accommodation” provided by the council in Southend on Sea – miles away from their home.

They are receiving a subsistence allowance of £67.40 every fortnight.

NRPF is a clause attached to those with insecure immigrant statuses such as those with limited leave to remain, those with spousal visas, overstayers or domestic workers.

Information obtained through a freedom of information request last year showed that there were 73 people on NRPF who were being supported by Hackney Council.

The national figures are vague. While the Home Office holds no statistics, research by charities such as the Southall Black Sisters and the NRPF network has shown that the problem affects thousands of migrants.

Many are women from the Asian sub-continent or are of African origin and have fled domestic abuse in marriages to UK citizens or in their home countries like Ms Yakubu.

After Ms Yakubu and her children became homeless, she had no choice but to turn to children’s services, who have a statutory duty to protect destitute children from harm.

But it is up to individual councils to determine what level of support will prevent children from being “in need”.

Children’s services decided that the family was not destitute after forming a picture of a “support network” of family and friends who could help her, claims Ms Yakubu.

Ms Yakubu said a social worker interviewed her children separately, during which time they referred to friends and acquaintances as “aunties and uncles”.

She said: “Africans call people auntie, uncle, sister, brother, even though we don’t even know each other or come from the same town. It’s a sign of respect. We socialise with them, it doesn’t mean that they are able to offer us financial support or take us into their property.”

The council eventually agreed to offer Ms Yakubu interim support in Southend on Sea. Being housed out of Hackney means she now faces losing her part-time job at a clothing retailer and a scholarship her daughter had won to a local summer school.

Carol Ackroyd, 63, of Dunlace Road who has lived next door to Ms Yakubu for 10 years said she was “appalled” at her situation. She said: “I know Hackney has very limited resources, but our councillors and senior officers need to work with other councils to support the most vulnerable people.”

A spokesperson for Hackney Council said: “We are unable to comment on individual cases. However, Hackney’s children’s social care always works hard to support vulnerable children. When it is necessary, and in line with our duty to protect children, we provide invaluable help in accordance with our statutory duties.”

While local authorities have a duty to protect vulnerable children, they are powerless to help beyond basic shelter and money for food.

Ultimately, the only option for those with NRPF status is to earn a full-time salary or to return home. At a time when immigration controls are being tightened, helping those with NRPF is not a government priority.

Vivienne Hayes, CEO of the Women’s Resource Network, the leading national umbrella for women’s charities in the UK said: “The failing is within the system. I think the whole issue of no recourse is a huge one but it is not a populist policy issue. It fits within the wider debate of immigration. The government is putting women in a position of no way out.”

A hard fought twenty-year campaign by the Southall Black Sisters (SBS) finally gained a significant victory with the introduction of the destitution from domestic violence concession, which lifts the no recourse status for women on spousal visas who escape violent marriages to UK nationals.

Ms Yakubu said that all she wanted was to be able to work and for her children to be able to return to  school. She said: “I have been working here for ten years with no help from any government or local authority, I have never claimed anything but have always worked and paid taxes.

“I’m not asking for much, all I’m asking for is help to protect my kids, because I’m not in a position to do it myself.”