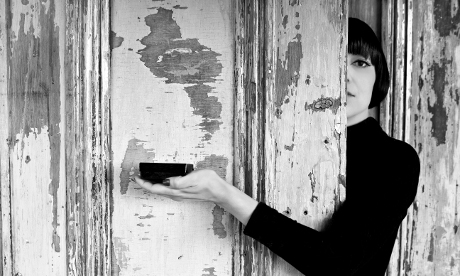 Elsie Martins takes the idea of music being all around us quite literally. For her new album, she spent a year making field recordings and conducting sound experiments around Hackney.

She then used the fruits of her wanderings to construct compositions using magnetic tape machines and old analogue recorders.

Explaining her methodology, she says: “It’s a really nice way of working because you’re not looking to do anything specific. You go off and come back at the end of the day with what you’ve got.”

Martins records and plays under the name Atom Eye and her debut disc is called The Otolith Sessions. Some of the compositions on the album are inspired by seemingly bizarre experiments such as laying a violin bow on a glass and performing the sound of the glass.

“Sometimes I would put several microphones in different places to record a section of a street or field, then play back the recording into the space and record that,” she says.

“I didn’t necessarily want to capture things in a confined environment, where you get a very defined, precise sound.”

Originally a journalist from Montreal, Martins moved to London in 2001 and now works full-time for BBC radio, alongside sound engineers who can recall when using analogue recording methods was the norm.

“They showed be how to use and cut tape because that’s how they used to do it themselves. It’s kind of a lost skill because you don’t use it in broadcasting any more,” says Martins.

While many musicians site playing Glastonbury or a big stadium arena among their ambitions, Martins has her sights trained on more experiments.

“Something I would really like to do is to record a burning piano, as all the strings gradually pop up,” she says.

For the present though, she is focused on playing live show, which considering how the album has been put together won’t be straightforward.

“I would need 10 or 15 people on the stage to do what I do on the album,” she says. “So what I am planning to do though is to put together a little tape orchestra.

“Lots of musicians use laptops to layer sounds, but I’m going to do that manually on stage. The machines do strange things sometimes, so it’s going to be exciting but also quite scary.”