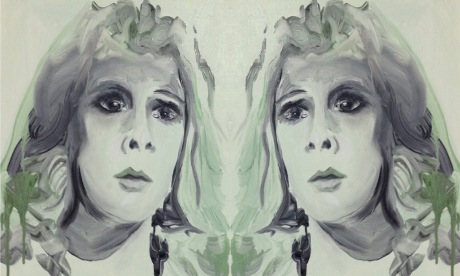 I’ll be your mirror: Vivien Leigh reflected in Method Madness by Cathy Lomax

In a joint exhibition opening later this month at Transition Gallery, artists from Brussels and London will display works based on the theme of masks that explore notions of selfhood, performance and consciousness.

The manifold interpretations offered by the artists range from the symbolic to the psychological.

“We left it up to the individual artists to interpret it in their own way,” says Cathy Lomax, curator of the show and a contributing artist.

British artist Mimei Thompson uses in her paintings the folkloric symbol of the Green Man, often carved on churches though typically seen as a pagan symbol. Other interpretations include Belgian artist Yasemin Senel’s psychological look at people that is broadly figurative but with abstractive elements.

“How a mask is this thing that you put on to assume a different identity, and that you can change your identity, I think is probably the overarching theme,” says Lomax.

In her own paintings, Lomax has focused on the figure of Vivian Leigh playing Blanche Dubois in Tennessee Williams’s A Streetcar Named Desire. One of her pieces shows Leigh, as Blanche, looking side on into a mirror, with her reflection staring back at her.

“The mirror image is this kind of unreal version of yourself – a mask I suppose,” says Lomax.

“A Street Car Named Desire was kind of famous because most of the actors are method actors in it. Although Leigh wasn’t a method actor, she suffered a similar condition to her character, and I was thinking about how when you’re an actor you assume this persona but actually it can be how your life is.”

Each of the 11 artists has made paintings for the show which, Lomax points out, is entirely in keeping with the theme.

“There is quite a tradition in the fact that in painting a face you’re making a facsimile of a person, so there’s this mask element actually in the act of painting at its most basic level.”