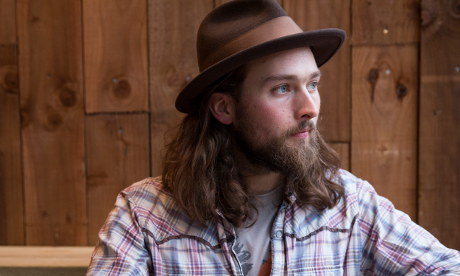 Bird Radio looks like a well-kept traveller. He has a beard, wears a brown hat and carries an old cardboard suitcase found in the street that he curiously calls Spartan.

Discreet and shy, he has a deep sadness about him, a sense of the weight of the world on his shoulders. Spotting him is easy though. When he first appeared in Newington Green three years ago he seemed to have popped up out of another time.

The flute is his instrument of choice, acting as an extension of his voice. For a long while it was what he would use to connect emotionally with the world around him. Hiding behind the instrument, he surprises and defies his audience’s expectations of what folk flute music should sound like.

But when Bird Radio opens his suitcase, don’t think it is because he is about to settle down. For a short time his suitcase will transform into a bass drum, providing a hard, deep-driving sound, and creating a texture different to that of the flute.

Inspired by solo artists such as David Bowie, Tom Waits and Scott Walker, these “story teller types who have something other worldly about them”, he has subconsciously let their music and strong characters influence him. His connection to the countryside is also an influence, especially the city of Hereford and “its old folk customs, winter nights, the smell of fires and those odd ceremonies with pagan roots.”

Bird Radio is about to have a month’s residency at Aldeburgh Music where he hopes to explore British folk music and heritage more fully. No doubt that along with his flute and Spartan he will soon be transporting new audiences to yet more magical worlds.

The Boy and the Audience (SFE/Cherry Red Records) is out now.

← At Home with the Ludskis – an artistic tribute to the Rio Cinema’s founderThe El. Train delivers Eugene O’Neill triple bill →