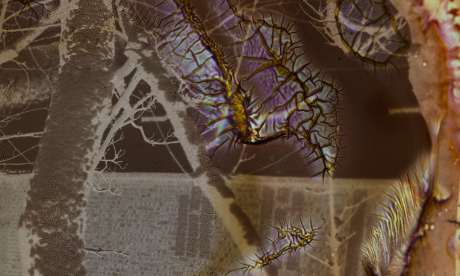 Hackney photographer Stephen Gill has given us a unique opportunity to roll together Philippines disaster relief and Christmas shopping with the release of a fundraising print Shark Stimulation.

The urgent needs of Typhoon Haiyan’s victims has prompted the renowned artist to create a special edition of 100 signed and numbered prints, the sale of which will support the Red Cross Philippines appeal.

The beguiling image selected for this project is from the photographer’s 2012-13 series Best Before End which includes images based on negatives soaked in energy drinks.

The idea for the series was Gill’s “reaction towards these dangerous drinks that are seeping into modern inner city life”.

He explains: “The colour negative films were part processed and soaked in energy drink, which caused image shifts and disruptions and softened the film emulsion. The softening allowed for manual stretching, moving, tearing and distortion of the layers of film emulsion to take place, and further manual shifts were added with a soft brush whilst the emulsion was still pliable. The individual negatives were then left to dry and re-photographed.”

Gill, best known for his iconic images of Hackney Wick, rose to international prominence in the early 2000s and has since exhibited his work around the world.

His intense place-based photographs, which use unusual processing methods to integrate the physicality of his chosen locales with the images themselves, have been published in Guardian Weekend, Le Monde 2, Granta, New York Times Magazine, Telegraph Magazine, I-D magazine, the Observer, Blind Spot and Colors.

The photographer is an active member of Hackney’s intellectual life and also a dedicated philanthropist who has supported a number of causes in the past.

“I often use my work to raise funds to try and help others; I think for me this is one of photography’s great strengths,” he says.

Typhoon Haiyan has affected 13 million people and 1.9 million people have been left homeless.
The most immediate threats to the millions of survivors are lack of safe drinking water and shelter, untreated injuries and illnesses, and insufficient food.

The Red Cross Philippines appeal will receive 100 per cent of the funds raised through the sale of these prints (excluding postage cost).