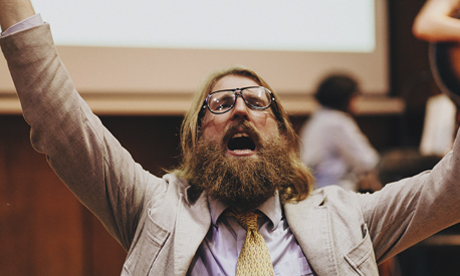 Ever wondered what church would be like without God?

Hackney is the birthplace of the ‘godless congregation’, otherwise known as the Sunday Assembly, which will embark on a ’40 dates and 40 nights’ roadshow tour this month to spread its ideas as far afield as the United States and Australia.

Comedians Pippa Evans and Sanderson Jones came up with the idea en route to a gig.

“We wanted to start a sort of ‘atheist church,'” explains Ms Evans, who says the pair wanted “community and celebration without religion”.

The Sunday Assembly tagline is “live better, help often, wonder more,” and the tone is resolutely positive, with the concept paying homage to Christian tradition by appropriating the Sunday church service format.

An enthusiastic rendition of Chumbawumba’s I Get Knocked Down (accompanied by a live band and a choir) was followed by a poetry reading, a ‘sermon’ and a moment for reflection on the day I visited.

The mood was celebratory and playful, incorporating lots of laughter, a hand-slapping game and one or two ‘mini raves.’

Later there was time for tea and biscuits.

There was just no God.

At the service last month a ‘sermon’ was given by Dylan Emery, a philosophy graduate, improviser and financial journalist who challenged the idea that individuals are more effective than groups and argued that humans tend to be more generous in social transactions than in financial ones.

Perhaps significantly, everyone involved in the Sunday Assembly gives up their time for free.

Congregants seem to be mostly educated middle class types in their 20s and 30s.

So what brings them here on a Sunday morning?

“I was brought up going to church,” said Katie, a volunteer serving squash. “I had no faith, but I loved that community feel, and I missed that.

“Seeing the same people, doing good works – this has the good bits, without the God bits.’

Ian, who travelled from Cambridge to attend, agreed.

“I was brought up with religion, and liked church,” he said. “But I realised there was no God. Church is good – but without God.”

The speed with which the idea has taken off (the first event was in January this year and there are now Sunday Assemblies in Exeter, Melbourne, New York and Bristol, with more planned elsewhere) suggests Ms Evans and Mr Jones may be on to something.

Past speakers have included Sandi Toksvig, who spoke on the subject of life, and Harry Cliff, who tackled the large hadron collider.

Future bookings include Lloyd Grossman, who will speak on Christmas, and Dan Snow, who will address the subject of remembrance.

As well as the weekly service, the Sunday Assembly team runs a philosophy group and ‘Smoups,’ described as a “network of smaller meet-ups where we give peer-to-peer support and encourage each other to live better”.

Said Ms Evans: “Sunday Assembly is about helping people achieve their full potential, encouraging them to do the things that they want to do, but perhaps feel too worn down to attempt.”

After a period of wandering in the wilderness, the congregation now has a permanent venue (Conway Hall in Holborn) which Ms Evans hopes will encourage a sense of community to develop.

“As we become more established and get to know each other, the ways that we can benefit not only our immediate community but those around us are endless,” she added.

The Sunday Assembly concept is still new, so it remains to be seen whether this popular event will grow into an established community.

At times it also feels a bit lacking in depth and focus.

But if you have ever felt that religion would be great if it wasn’t for God, this could be the place for you.