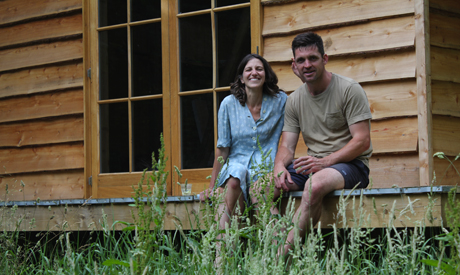 It sounds like an eccentric family holiday, but picture a woodland campsite consisting of farm animals, compost toilets, an outdoor kitchen and an art room and you are pretty much imagining the so-called school of self-reliance that is being set up by ex-Hackney couple Dan Morrish and Emily Charkin.

The pair, who left London three years ago, are in the process of establishing an “anarchic educative experiment” after becoming disheartened with mainstream schooling, and they hope to tempt other Hackney residents to join them.

Desks and chairs are not needed at the school of self-reliance, because children learn through making, building, growing their own food and by being exposed to an adult work environment.

The school aims to be self-sufficient via a vegetable garden and livestock and, once they have secured a permanent location, the couple hope to recruit families, adolescents and pensioners to join their project.

Ms Charkin a Phd student, her architect husband Mr Morrish and their three children were inspired to set up their own school after successfully building a handcrafted timber structure with volunteers and children.

But what is so wrong with our schools?

“My experience is that at every level of the education system there is a level of despair about what the previous level has done,” says Ms Charkin.

“You start to think, who is getting a good education?

“And why is there such widespread dissatisfaction?”

The couple do not share the belief, held by many, that, broadly speaking, the school system is the best way to educate a child. Charkin points out that before the education act in 1870, communities were self-educating, and she says they achieved much the same

‘You start to think, who is getting a good education?’
results as they do today.

“Children are far better at learning than we think they are,” she adds. “One hundred and fifty years ago people were sorting this stuff out for themselves.”

“Dorset residents in the 1930s would walk five miles a day, grow all their own vegetables and actually have surplus for families who didn’t have enough. We think it’s amazing now if children grow a sunflower.”

Another frequently cited success of the state school system is that it challenges inequality, but Charkin insists this is not
the case.

“Inequalities have only gotten worse,” she says. “The only time there has been social mobility has been when there has been wider economic mobility, such as in the 1960s. It has never been to do with the schools.”

It is clear the school of self-reliance works in harmony with Mr Morrish and Ms Charkin’s way of life, but it is less easy to see how other adults could give up their day jobs and relocate to the remote countryside to live a modest lifestyle.

“It is not easy to see how you can lend the model we’re talking about to most people’s world,” concedes Mr Morrish.

The school of self-reliance may not be a setup that could be rolled out across the country, but its aims do reverberate with frustrations felt by many at the government’s assessment-heavy ‘sausage-factory’ schools and difficulties faced by children who cannot fit into mainstream education.

“We’re stuck,” says Ms Charkin. “We need a reboot. Rather than sitting around, we’ve got to start trying to generate some solutions.”

Note: The opening paragraphs of this article were amended at 5.10pm Tuesday 22 October 2013.