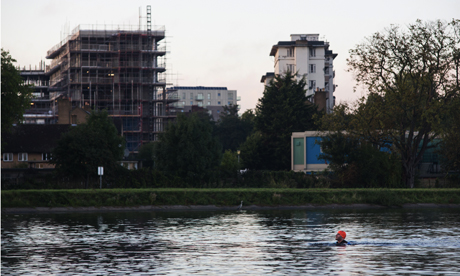 Splashing out: The Hackney Citizen‘s Josh Loeb swimming in the West Reservoir (with heron and Woodberry Down in background). Photograph: Eleonore de Bonneval

So, this must be what it feels like to be an otter or a seal or a dolphin, slooshing through the water and out in the open air.

Like many others, I have often wandered past the West Reservoir in Stoke Newington and longed to swim in its deep, clean waters.

And this month I got the chance to do just that after swimming pools operator Greenwich Leisure Limited took plunge and opened up this man-made lake for use by aquathon participants – and less sporty types like myself.

The reservoir is tucked away behind the Castle Climbing Centre on Green Lanes and is flanked by the New River.

Once you’ve slipped on a wetsuit (wearing one is mandatory for safety reasons) you are given an induction and enter the Victorian reservoir.

You are rewarded with views that are breathtaking, and so much more exciting than anything you can see from the inside of a swimming pool.

You can propel yourself past the tower blocks of Woodberry Down and watch the herons fishing.

And as summer was drawing to a close on the day I took a dip, house martins swished through the air above me.

The only other place I know in London where you can have an exhilarating swimming experience like this is on Hampstead Heath, but the West Reservoir is a much larger body of water than any of the three Heath ponds, and the urban environment surrounding it somehow adds to the enjoyment of being in the water.

This new swimming venue has been launched in response to what the council says has been a phenomenal rise in the popularity of open water swimming.

“It had been on the agenda for some considerable time,” says Stoke Newington West Reservoir Centre manager Mark Owens. “It was just a case of finding the right time to do it and making sure all the legalities are in place with health and safety etcetera.”

Interest from residents has been “overwhelming,” according to Mr Owens, who adds: “We’ve had all sorts of people – men and women, and people of all abilities. Some are part of a Triathlon club, for some it’s their first time. It’s not been monopolised by clubs and professionals.

“We had over 350 inductions completed, and that’s in the space of three weeks since we’ve opened, so it’s getting more and more popular.”

“People come from outside M25. The net has been spread and the word is out there.”

Sailing is also available on the reservoir and some are expecting a surge in popularity of that sport as more people discover what a hidden gem the place is. Apparently couples have even been booking to have their weddings there.

From April 2014 the centre is hoping to run four sessions per week.

Prices for regular open water swimming sessions are £5 for Better swim members, and £10 for non-members.