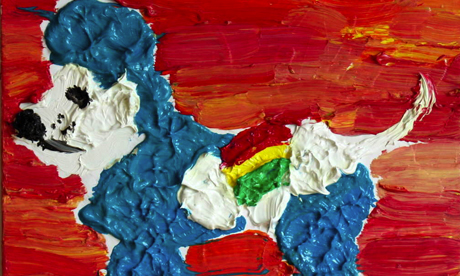 When one of the curators of an art show describes the exhibitors as “bad painters”, things would seem to have come to a pretty pass.

But in fact the term refers to a school of painters who are “knowingly and consciously trying to paint in a mad way,” according to Cathy Lomax, co-curator and director of the Transition Gallery, based just off Broadway Market.

Intriguing pieces by ”outsider artists” – another term that is very much open to interpretation but can be used to mean artists who may be marginalised or are trying to challenge the status quo – are also on show at the ‘Tales of the Unexpected’ exhibition next month.

The show seeks to challenge conventional forms of art by disrupting the line between good and bad taste.

Ms Lomax says: “These artists are unrivalled in their desire to push boundaries with provocative and unpredictable artwork.”

His ‘Olympian’ painting is a clear example of this.

Although at first glance the renaissance-style painting of a naked Olympian man may appear innocent, give it a closer look and it is clear that the pubic hair in the painting is in fact real human hair.

Despite the fact that the artist has chosen to soak the canvass in Old Spice aftershave, his painting style remains delicate and ornate.

As a result, his work lies somewhere between the exquisite and the grotesque.

Cathy Lomax says: “As curators have been subsumed by provincial art world trends, challenging exhibitions like this have become rare.”

For this reason she is keen to celebrate the “highly distinctive, personalised nature of all the artwork involved”.