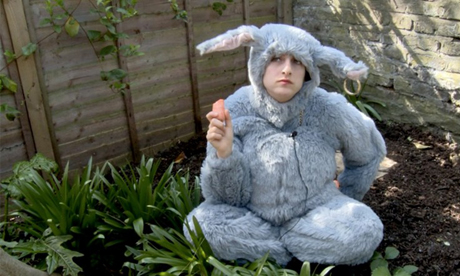 Miriam Elia in a scene from her short film

Humorous and controversial artwork by an exclusively female cast of established artists is on show at the A-Side B-Side Gallery in Hackney Downs Studios until the end of next month.

Long-awaited exhibition Girl’s Aren’t Funny is an explicit attempt to challenge the long-held view that women “aren’t as funny as men”, a statement made by famed feminist thinker Germaine Greer in a television show in 2009.

Tinsel Edwards, the show’s curator, says that although all the artists featured are self-proclaimed feminists, the exhibition is not intended to be focused on purely feminist issues.

“Instead our priority is genuine humour,” she adds.

The show has certainly succeeded in achieving this goal.

It showcases work by Edwards herself, as well as by Claire Douglass, Miriam Elia, Sadie Hennessy, Sarah Maple and others.

Through diverse mediums ranging from painting to sculpture and performance art to short films they express their humour in distinctive ways.

Take Miriam Eliah’s short film, which features her as a giant rabbit chatting to a journalist about her housing issues and what to do with her never-ending stream of bunnies as she chomps nonchalantly on carrots.

Here, the famous stand-up comedian takes a satirical side-swipe at the benefit system.

In direct contrast to this overtly political piece, Clair Douglass showcases The Great Beard of Joy, a playful light-up beard which visitors will be able to try on.

The comedy ranges from the laugh-out-loud humour of slap-stick pieces to the subtle wit of tongue-in-cheek satires.

This show counters the widely-held view that neither artists nor feminists can ‘take a joke’.

Instead of typecasting feminists as uptight and humourless, it proves women can be funny in their own right.

As a result, the show manages to subtly grapple with the more serious issue of gender.