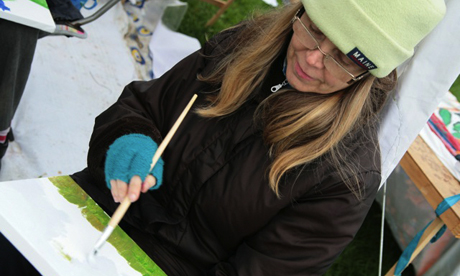 Artists created works for the exhibition as part of a day of action on the Marshes last year. Photograph: Save Lea Marshes

Artworks celebrating the flora and fauna of Leyton Marsh are being exhibited at a Hackney cafe as part of the latest stage in a campaign fighting ‘over-development’ of one of East London’s most cherished wild spaces.

The timing of this exhibition of paintings is apt, coming around a year on from the removal of a temporary Olympic basketball training facility that was controversially built on Leyton Marsh amid protests from activists.

This area of parkland, a designated nature reserve, is part of a wider green lung known as the Lea Marshes that includes Hackney and Walthamstow Marshes.

Pressure group Save Lea Marshes, which organised a rally to ‘save’ the green space earlier this month, is opposed to Hackney Councils plans for new car parks on Hackney Marshes as well as other schemes it says amount to ‘commercialisation’ of Metropolitan Open Land.

Hackney Council’s leisure chief Councillor Jonathan McShane has sought to play down the car park schemes, saying the Town Hall’s plans would result in fewer vehicles using the Marshes than have done so in the past.

Now Save Lea Marshes is encouraging people to enjoy paintings by artists, campaigners and local residents that are on show at Springfield Park’s Spark Café until the start of November.

Jane Bednall, a local artist and long-time Save Lea Marshes campaigner, has been instrumental in managing the project, dubbed Marshroots Art.

She said: “The community-led nature of the exhibition celebrates what residents cherish about the Marshes.”

Ms Bednall will be selling two of her own paintings to raise funds for the Save Lea Marshes campaign.

For more information on the campaign see saveleytonmarsh.wordpress.com

The exhibition is at Spark Café, Springfield Park, E5 9EF until 4 November