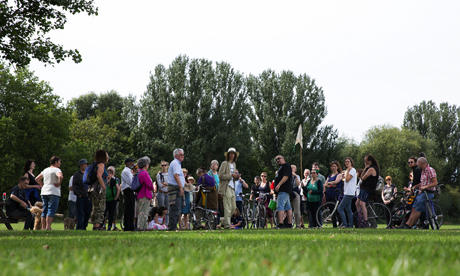 Supporters of campaign group Save Lea Marshes at a rally on Hackney Marshes earlier this month to show their opposition to the council’s car park scheme. Photograph: Eleonore de Bonneval

The Town Hall’s plans for a new permanent car park on Hackney Marshes have been pulled from the agenda of tonight’s planning sub-committee amid an escalating row about what campaigners describe as a lack of consultation over the scheme.

The council’s press team said the plans would be resubmitted again soon, but the eleventh hour withdrawal is the latest twist in a long-running saga over the plans and comes after it emerged that the contentious car park had in fact already been constructed, pre-empting the planning sub-committee’s decision.

Backbench Labour councillor Ian Rathbone today broke ranks and criticised the Labour-run council, saying it had not followed due process.

He added: “Maybe they thought it was still the Olympic situation and they could do whatever they like and residents will have to lump it.”

The car park scheme is being backed by leisure chief Councillor Jonathan McShane, and the council also wants to build a second car park in North Marsh which opponents fear could pave the way for more controversial events like last year’s council-backed BBC Radio 1 Hackney Weekend.

Initially council press officers said they could not comment on a live planning application, but they have subsequently sought to play down the scheme, saying the car park comprised a leftover section of the temporary coach park built by the London Legacy Development Corporation before the Olympics.

Campaigners say they received assurances that the green space would be returned to its former state after the Olympics and believe the council has used the Games to sneak through a scheme that they say requires permission from the Planning Inspectorate since the area is registered as Common Land.

Cllr Rathbone said he and fellow Leabridge Ward councillor Deniz Oguzkanli have written to the council to express opposition to the application.

Cllr Rathbone said: “The application should never have gone forward. If they wanted to have a car park, fine, they should have returned the area to grassland and then applied to build it.”

He added that he wanted the matter to be “properly investigated as in our view it should never have reached this stage”.

In a statement on its website, campaign group Save Lea Marshes said the car park on East Marsh “has not been subject to any consultation with the community or interested groups and has not attained any of the necessary permission in order for it to be a lawful construction”.

Mustafa Korel, lead organiser of Hackney First, a group of activists advocating ‘independent politics’ in the borough, said: “This is an example of the council having its own ideas and not involving the community.”

A council spokesperson said: “The application relating to proposed reinstatement of a car park on East Marsh has been withdrawn and will be re submitted shortly. The application was due to be heard by the Planning Sub-Committee on 9 September.