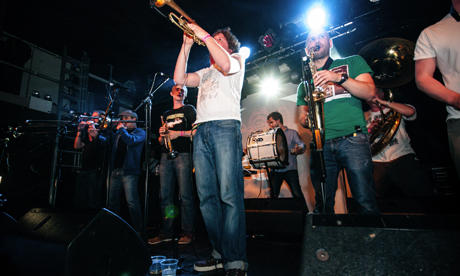 Trumpeter and melodica player and songwriter Steve Pretty says the group’s aim is to “put a British stamp on the American tradition of brass bands, with a few nods to colliery bands”.

As their name suggests, reflecting some of the music of their Hackney base is key.

“We play Balkan tunes, there’s afrobeat in there, there’s rock and then there’s the new Hackney as well – the slightly more trendy side of things,” says Mr Pretty.

They also draw on the wide range of traditions in band members’ musical backgrounds, including classical, jazz, big band, opera and indie music.

The band is well known for their creative covers, including a reworking of Blackstreet’s ‘No Diggity’ and a Prodigy medley.

However, on the new album, says Mr Pretty, there is a “focus on original music”, including “intricate, complex, very Africa-influenced tunes”, “big thrashing moments” and “slightly quirkier” tracks.

He adds that, while the band is “not explicitly political”, Common Decency pays tribute to the brass band tradition of fostering “community solidarity”.

The album’s title song (written by him) is “a call to arms, in a very polite way”.

“If there is one political message on the album,” he says, “it’s ‘have a bit of common decency’. I wrote that tune when I was annoyed with people not behaving properly and it is now our guiding philosophy.”

Members of the band are involved in community brass projects in London and Norway.

But a social conscience does not mean the band’s music isn’t fun; bringing a sense of energy and festivity to live performances is a high priority.

Mr Pretty says:  “We can’t do a whole set parading, but we love to get off stage, get down in people’s faces and play, and keep the party going.”

Common Decency is released on 23 September, and Hackney Colliery Band will be touring the UK this autumn