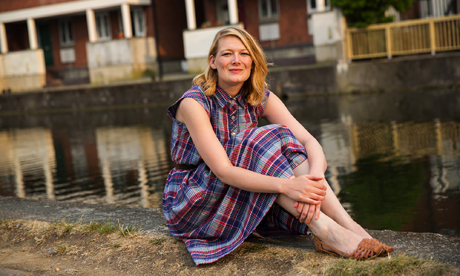 Brought up in a string of sink estates, care homes, B&Bs and halfway houses across the UK, fed on a diet of chips and Happy Shopper ketchup, yet better nourished by the public library, Kerry Hudson has led a life which parallels the narrative of her first novel, Tony Hogan Bought Me An Ice Cream Float Before He Stole My Ma.

We meet in the beautiful Arnold Circus in Shoreditch – social housing done properly – to discuss school-hopping and being “written off”.

By using the material from her own life for the basis of her debut novel, Kerry Hudson was playing with fire.

“Before it came out I thought, if no one likes this they don’t just not like my book, they don’t like me,” she says.

But the gamble seems to have paid off as Tony Hogan was recently nominated for various literary accolades, including the Guardian First Book Award 2012.

Hudson feels that the voice of the young working class woman is underrepresented in the literary marketplace, and her publishers apparently told her they had never come across a young woman writing “in this way.”

“They mentioned my ‘vernacular’”, she says, “but I assume they really meant the swearing and the sex and that sort of rawness. I thought that was fascinating. I mean young women do that just as much as young men.”

Hudson attended a grand total of eleven primary schools and four secondary schools, leading to “a lack of grounding and a lack of community”, which made her more aware than most about the importance of a settled education.

When 16 year-old Janie, the protagonist of Hudson’s novel, sees a grotesquely sweaty careers advisor at school, he tells Janie that kids from her estate don’t go to university.

He doesn’t mean to be ‘harsh’ (and yes, he makes inverted comma gestures in the air), but her plans are unrealistic.

It is a gutting irony that Janie’s fledgling idea of entering further education is unceremoniously quashed by someone whose job it should be to encourage it.

“I was trying to show that we are failing kids like that,” Hudson says. “Janie is at that juncture and she can go either way. There are loads of kids who have all this potential, but society is essentially failing because of perceptions of what they might amount to or what they have a value to say.”

Hudson’s first novel highlights the stigma that surrounds working class children from the most impoverished estates and the most deprived areas of the UK.

“If you come from a certain estate and you are dressed and talk a certain way, you are automatically sidelined by mainstream education,” she says. “I had a lot of amazing teachers but I also had a lot who would write me off because they saw me as what I guess what they call a chav now, though that word didn’t exist at all then.”

The pressure to get into a good quality primary school results in what Hudson calls “ghettoisation.”

“All those kids who didn’t quite make their grades or who didn’t do really well that year are going to be streamed into one underachieving tunnel and they will be inside of that for the rest of their lives,” says Hudson. “I think teachers have such a massive job to do now, and so many more problems to deal with than they did back in the 1990s and 1980s. Efforts are being made, but it’s obvious there are kids that are still slipping through the net.”

Even after Janie and school give up on each other, the public library remains a place through which to escape the stormy life at home but also a place to learn.

As Janie says in the novel: “The library was a bubble, outside didn’t exist.”

Hudson is adamant this life-saving and simple means of self-education must be kept alive.

“Libraries haven’t been deemed a valuable public service” she says, “but lots of people would not be where they are today without them. A book is so expensive now, how on earth do poor people get access to that? I read an article that mentioned there are tens of thousands of UK homes do not even have one book. Libraries are free. They are welcoming to all people. They are so important.”