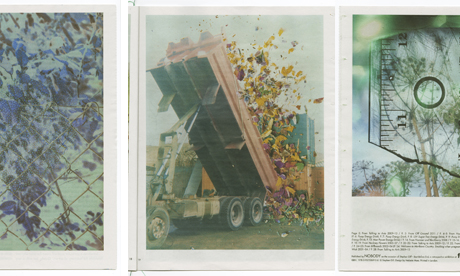 ‘Risen from the soil of the borough.’ Photographs: Stephen Gill

Hackney-based photographer Stephen Gill has created a body of work that has literally risen from the soil of the borough.

Gill rose to prominence in with the publication of Hackney Wick (2005) and Hackney Flowers (2007), part of his decade-long obsession with the social and physical bubble that is the Wick. Several of the best-known photos in these collections were buried in the post-industrial earth of the lower Lea Valley before being exhumed and re-photographed; others were re-figured together with found objects from the area.

In a slightly different vein, the A Series of Disappointments (2008) includes meticulously-precise pictures of disused betting slips discarded in local bookies. Off Ground (2011) is a series of similarly-styled images of bricks, rocks and other missiles projected during the 2011 riots.

In the recent series Talking to Ants and Best Before End, Gill returns to experimentation with the physical substances of the borough – inviting insects inside his camera, using miscellaneous liquids and other locally-sourced objects to help him craft his images.

Gill notes that during the 14-year period over which these photographs were created he developed “an increasingly strong desire to jump outside of its technical boundaries and to challenge the limitations they imposed”.

As he puts it, his approach was to work with photography’s ‘weaknesses’ and to encourage ‘accidents’ to happen in order “to help arouse the spirit of the subject and convey things in other ways”.

On the images collected in his new publication Not in Service, he says: “Bringing the various Hackney studies together for the first time and experiencing them as a single body of work has been an interesting project for me.

“While my preoccupation has always been about expressing my reaction to the place rather than creating any kind of definition of it, with the benefit of the distance that time offers I now find that in the accumulation of small detail the series collectively have indeed – perhaps inadvertently – captured something of the essence of the Hackney that I have known and loved so well for so long.”

As Gill has risen to fame, his hand-crafted books have become dearer.Not in Service is a free-bee, however, timed to coincide with the recent Best Before End retrospective exhibition of his work at Foam Fotografie Museum in Amsterdam.

The 28 pages of newsprint feature images from most of Gill’s major Hackney-themed series, including Talking to Ants, Off Ground, Hackney Wick, Best Before End, Hammer and Blackberry, Hackney Flowers, A Series of Disappointments, Trolley Portraits and Billboards.  The photos are accompanied by a short text by Hackney author Iain Sinclair.

Not in Service, 28 pages, is published by and available from Nobody Books: nobodybooks.com

← Photographer Colin O’Brien’s on how post-war London was a ‘playground’Undercover: The True Story of Britain’s Secret Police – review →