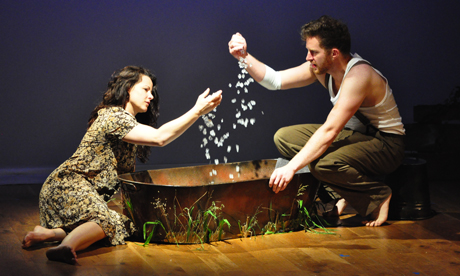 What does it really mean to be with one person – forever?

The implications of the phrase ‘growing old together’ are ruthlessly explored in a play that follows the journey of a passionate yet turbulent lifelong relationship.

On paper, Skin Tight, directed by Jemma Gross, might appear to be a boy-meets-girl romance, and yet Gary Henderson’s script quite literally pulls no punches.

Opening with an explosive fistfight, as the play progresses the characters’ skeletons are dragged kicking and screaming out of the cupboard, revealing dark secrets through moments of pathos and laughter.

“I could pick up the script today and it would make me cry,” says lead actress and Epsilon Productions’ producer Angela Bull, who promises the play will take the audience on “an emotional rollercoaster”.

The seemingly unbreakable bond between New Zealanders Tom and Elizabeth, played by John Schumacher and Angela Bull, is tested both by their brutal honesty and their reluctance to grow old quietly.

“They are refusing to let go, they refuse to succumb to the fragility of life and the numbness of the mind and the body”, explains Bull.

A lifetime of memories and experiences are condensed into an hour, yet what the piece lacks in length it makes up for in intensity.

Bull relishes the challenge of the intimate piece, hoping the play will cause the audience to experience not only a jolt of personal recognition but also offer food for thought.

“We choose plays that will be a talking point, to fire debate, bring people together and make them talk, not just walk out the door saying: ‘That was nice, what are we going to have for dinner?’

“I think theatre has been so stifled over the years due to the commercial element.

“If a little theatre company can strive to bring some reality back to what theatre has always tried to be, that is ultimately how I would like the banner of Epsilon Productions to be held.”