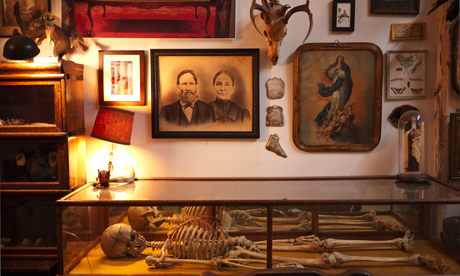 The summer months have heralded the arrival of a new lecture series.

The subject is death.

Proceedings at the Morbid Anatomy Lecture Series, which began last month and is continuing through July at The Last Tuesday Society in Mare Street, have included a “wax wound workshop” and a talk on the Neapolitan cult of the dead.

Still to come are talks on the “danse macabre” and London’s folk medicine, and there will be an opportunity to create your very own bat in glass dome – using a real dead bat.

The bat skeletons used in the workshop are apparently from the Japanese house bat Pipistrellusabramus which is listed as being of least concern in regards to conservation status.

The series has been created by Brooklyn-based artist, curator, blogger and graphic designer Joanna Ebenstein.

“‘Morbid anatomy does have a very straight meaning,” says Ebenstein.

“It is a medical term meaning pathological anatomy, but I like how morbid has another totally different meaning.”

Ebenstein says she has been called morbid her whole life and used to accept this description of herself.

But she adds: “Then, one day, I thought, wait, why is it considered morbid to think about death?

“My academic background is in intellectual history, and through this lens I came to look at our own historical era as the strange one.

“Every other time and culture has a dignified way to discuss, commemorate and contemplate death.

“I consider death life’s greatest mystery, and our foreknowledge of it that which defines the human condition. I think it’s really very morbid not to contemplate death.”

Ebenstein’s fascination with medicine and death and their cultural manifestations in different historical periods and locations led her to make a “pilgrimage” in 2007 to the great medical museums of the western world.

The material she gathered evolved into her Morbid Anatomy blog, Brooklyn’s Morbid Anatomy Library (of which she is “keeper”) and events in Brooklyn and elsewhere, now including London.

The London series is being hosted by Hackney’s Last Tuesday Society.

The Society organises occasions ranging from lectures to balls to animal-themed parties.

Vadim Kosmos, the manager of its shop/museum on Mare Street, has an interest in the histories of science and art and where they meet, and a “decadent, kind of old-fashioned aesthetic”.

The Mare Street venue, where many of the events Ebenstein has organised are taking place, recreates the late Renaissance idea of a “cabinet of curiosities” – a room stuffed with an aristocrat’s jumbled personal collection of natural history specimens, mineral samples, religious iconography and ethnographic items.

“The store is a perfect location for the lectures,” says Kosmos. “We’re the nearest equivalent in London to the Morbid Anatomy project in terms of aesthetics and ideas.”

Ebenstein came into contact with the Last Tuesday Society through Hackney artist Viktor Wynd, its “Chancellor”, via her blog, and he invited her to curate the London Morbid Anatomy events.

Ebenstein likes Hackney which, she says, has the same kind of cultural appeal for her as Brooklyn.

“I feel very at home here,” she says. “I like the diversity – young hipsters and students and older people.

And Hackney likes Morbid Anatomy. Many of the events got booked up quickly, particularly – according to Ebenstein – the ones that connect medicine and death with sex, such as A History of Music Driving Women Mad and Sex and Dissection in Georgian London.

“Our mouse taxidermy classes sell out immediately,” says Kosmos, “– we can’t put enough of them on.”

Such happenings are appealing, thinks Kosmos, because they tap into a current interest in getting close to bodily structures and their fragility as a way of making sense of ourselves.

As he succinctly puts it: “We’re disconnected from death.”

For more go to The Last Tuesday Society.