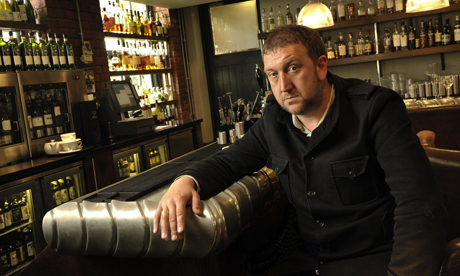 Russ Litten, author of Swear Down

The spotlight is shone over a violent East London in author Russ Litten’s not-so-standard whodunit.

Detective Sergeant Ndekwe has been assigned his first murder case following his transfer to a fictional Hackney police station.

A teenage boy has been shot dead in broad daylight on the Crown Heights estate.

Luckily for Ndekwe, two suspects have come forward, a teenager with proven gang links and an elderly ex-merchant seaman, and both seem more than happy to take sole credit for the crime.

While most of Ndekwe’s colleagues take this as a sign that Christmas has come early this year, Ndekwe perseveres alone, driven by his desire to find out the truth behind this brutal murder.

The real story of the novel lies in how the relationship between the two main protaganists first began and have developed.

We are given glimpses into both lives through their confession tapes which are revealed in bits throughout the story. It is through their relationship with one another that Litten convincingly lends some compassion to these less than empathetic characters.

Ndekwe serves as the moral compass. Of particular interest is how his work and the senselessness of the violence that surrounds him affects his relationship with his wife.

Anyone who regularly reads a newspaper or – in some parts of London – steps outside their front door can be at risk of becoming desensitised to the seemingly endless repetition of headlines reporting more brutal violence.

It is a testament to Litten’s skill as a writer that while the characters may have all become jaded by their surroundings, he keeps the readers interest and sympathies piqued as he slowly and subtly reveals how each man came to be where he is.