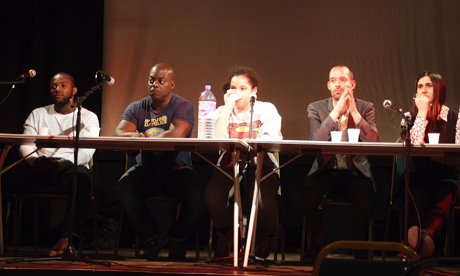 Panel at the public meeting where fears were aired over Taser roll-out. Photograph: Glenn McMahon

Campaigners have expressed concern over further civil unrest following the introduction of 24-hour Taser patrols in Hackney this month.

London boroughs that introduced the measure last year recorded dramatic rises in its use.

Forty officers have been trained in every borough to use the so-called less-than-lethal weapon as part of a citywide roll-out.

Four pairs of armed officers will patrol the streets at any one time responding to threats of serious violence within minutes.

The move has prompted fears of inappropriate and disproportionate use on youths and ethnic minorities that already feel under siege from the police.

Police statistics already show a 650 per cent jump in use for five outlying boroughs that introduced the 24 hour Taser patrols last April rising from three instances in 2011 to 23 in 2012.

The boroughs were Barking and Dagenham, Bromley, Enfield, Harrow and Kingston.

In Hackney Tasers were discharged twice in 2011 and four times in 2012 when local police still relied on calling the Territorial Support Group for their use.

Stop Criminalising Hackney Youth, an advocacy group that challenges the mistreatment and criminalisation of young people by police, said the easy availability of Tasers could encourage lazy policing with officers using them as a compliance tool when dealing with young people particularly during a stop-and-search.

Sadie King, who set-up SCHY after the riots in 2011, said: “We are concerned that some of the most vulnerable young people who are being pushed into more extreme levels of poverty by the welfare reforms will become the victims of police Tasers. As a social housing resident I have seen first-hand the punitive and even sadistic police behaviour towards young people.

“I am not alone in the fear that Tasers will be used as instruments of torture. Tasers won’t reduce gun and knife crime, they will just put us on the path towards increased violence on the streets.”

At a meeting last month in Homerton to discuss the implications of the Taser roll-out, Emeka Egbuonu, an author and youth worker at the Crib Youth Project, in Newington Green, agreed saying young people were scared that a small altercation could quickly escalate into them being tasered.

He said: “The animosity between some of the young people and the police is already at an all time high and [if] this new weapon is misused the negative outcome could lead to another uprising with people wanting to arm themselves to protect themselves from the police. This is not the way forward. All it takes is one unjustified use of a Taser to start something. A lot of young people are passionate about working with the police and finding a different solution rather than adding more force to the streets.”

At the meeting a mother recounted the moment she watched her teenage son being Tasered by officers as he lay on the floor, hands tied behind his back, on an estate in Lower Clapton in 2011.

Borough Commander Matt Horne wrote on his blog this week: “How we police young people can be challenging and I’ll be the first to admit we don’t always get it right, but we get it right more often than not.”

The IPCC are currently investigating the tasering of a 17-year-old bystander in Haringey as police responded to a burglary last year which they later described as a mistake.

When asked about Taser misuse Detective Inspector Andy Harding told the London Assembly Taser Working Group in March that “as far as we are concerned, there’s been nothing that has stood out as being something that causes us concern.”

Police justified the roll-out by citing increasing violence and a secret document called the Strategic Threat and Risk Assessment drawn up by London’s most senior officers.

However according to police statistics, the British Crime Survey and hospital data taken from A&E admissions violent crime in 2012 was down by around 14 per cent in England and Wales.

Dean Ryan, a youth advocate and member of SCHY, said the real reason Tasers were being brought in is over an expected increase in social unrest due to austerity measures.

He said: “About two years ago the new police commissioner Bernard Hogan-Howe said that in the age of austerity we’re going to see more social unrest and more protests. The Tasers coming out now is at a time when the government is scared. There’s a lot of anger out there, we saw that during the riots, so the reason Tasers are being brought in is a way of social control.”

The Metropolitan Police Authority, London’s former police watchdog, refused a request to increase the number of Tasers in 2011. The MPA was abolished by Boris Johnson in 2012 and the policy was reintroduced shortly after when four officers were stabbed in Harrow.

Sophie Khan, a solicitor advocate and director of Police Action Centre, has sought permission from the High Court to launch a judicial review on behalf of a client.

She said: “There’s been no consultation before the increase in Tasers was introduced. We don’t know why the decision has been taken, what reports were prepared or assessments done. It has all been hidden from the public.”

There are also concerns over the health effects with more than 500 people having died in the US, according to Amnesty International, either directly from being Tasered or a secondary cause such as heart failure or head injuries.

The devices fire two barbs up to six metres into their target emitting a 1,200V load that prevents brain signals controlling the muscles. You-tube videos show victims falling over unable to break their fall and hitting their heads on the ground.

Since their introduction to the UK in 2003 five people have died after being Tasered, Cllr Angus Mulready-Jones told the meeting, but police say the deaths are down to secondary causes not the Taser itself. The most recent death was a 27-year-old high on drugs in Cumbria who died last year after being tasered four times in a minute.

Juney Muhammad, a mental health manager at a hospital in South London, said people on drugs or with mental ill health are likely to react adversely to the effects of the electricity long after the tasering is over.

She said: “They make people more aroused, that means I am going to behave more excited. I’m going to fit that stereotype of being strung-out and out of control. That’s what Tasers do. It excites the brain. It’s not just the trauma, but what it does to the body. It doesn’t leave a mark like the truncheon but internally it damages you.”

A recent Freedom of Information request made by the Guardian revealed that 50 per cent of people who are tasered are black while 30 per cent have mental ill health or emotional problems.

John Tully, chairman of the Metropolitan Police Federation and a former Hackney police officer, said he would like to see every officer in London armed with a Taser.

At the time of publication Hackney Police had not responded to questions about the impact of Taser use in the borough.