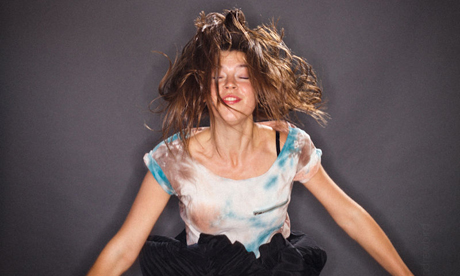 'Her stories are laced with wonder from the West Coast'

Meeting Lovelace, aka Rebecca Whitbread, a Hackney-based singer and music maker with an unmistakeable Californian twang, was a little like embarking on an adventure. I waited for her in a café near Dalston Junction; she bounded in exclaiming she had arrived by bike and that it had been a good day.

On examining the four inch-long scar along her forearm (the work, she says, of a callous driver who braked into her after she had flipped him the finger), one could see returning to her bike meant a lot to her, and the same could be said for returning to play the guitar, which her injury had robbed her of for some two months.

Originally trained as an actor, Lovelace began singing in two very different bands after she arrived in London – one a 1940s duo, the other an experimental punk band. She tells me she only found her voice, her “musicality”, one sunrise after she was awoken by a jam during the Burning Man festival. A band of musicians got on top of a renovated yellow school bus with a DJ booth, kitted out to look like a pirate ship (naturally), and she sang lyrics to songs she didn’t even know she knew, with everyone high except the “sober as a judge” Lovelace, who let the music “come out, for hours and hours”.

The music of Lovelace is challenging and engages you, the very opposite of the muzaky jazz playing in the background while we chatted over coffee. If you get the chance to see her play then do so, and if not as her one-woman-band then as part of London Contemporary Voices for which she sings and writes beautiful choral pieces.

← Rise of Olympic boxer Harry Mallin the subject of new film The Wilderness‘I’m a choir starter’: Hannah Brine says all are welcome at Victoria Park Singers →