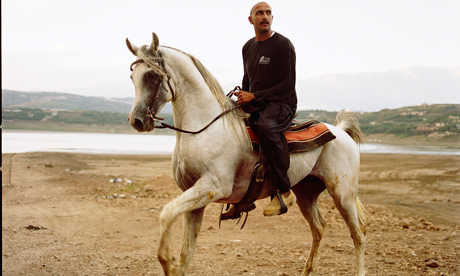 A still from Apples of the Golan (Palestine, 2012) by Keith Walsh and Jill Beardsworth

Set to return to the Barbican and the University of London this month, the Palestinian Film Festival has become an established fixture in the last few years, showcasing talents of the region while expanding into new drama from neighbouring Lebanon, Jordan and war-torn Syria.

For co-director Nick Denes, the PFF’s increasing profile has been a long time coming. Since its genesis fifteen years ago, the festival has expanded to take in nearly forty films over two weeks while becoming, as Denes points out, “the UK’s highest profile annual cultural event on the subject of Palestine”.

“The motivation behind it continues to be two-fold,” he says. “On the one hand, the organisers have a long standing passion for the visual arts, and a particular interest in exploring the historically changing representation of Palestine in film. On the other, the PFF believes that new understandings of circumstances in Palestine can be introduced to UK audiences through the cinematic arts.”

So while the complex issue of Palestine’s relationship with Israel remains a major theme for the festival (a ‘special thematic session’ marks the 25th anniversary of the first intifada), the films on offer are also surprisingly eclectic. There is everything from sci-fi, ghost stories (Eyas Salman’s short film No News), and even a ‘comic supernatural documentary’ on offer with Jean Wejnoon (Genies and Madness), by first-time director Mamdooh Afdile.

Meanwhile, other highlights include Rani Massalha’s Elvis of Nazareth (also a short), in which a young boy encounters an Oud-playing Elvis Presley obsessive; and the visually stunning documentary Flying Paper, co-directed by Nitin Sawhney and Roger Hill, which follows an attempt by Palestinian children in the Gaza Strip to enter the Guinness Book of World Records for the most kites ever flown.

“We always aim to surprise audiences,” Denes says. “Certainly many films we receive are primarily concerned with the struggle for justice, whether current or historic. But I think UK audiences do recognise that artistic practice in or upon Palestine is not limited to the question of geo-politics or struggle.”

Denes is philosophical when reflecting on what the festival hopes to achieve, saying: “We’ve never set ourselves a goal beyond the festival itself. At best, the festival can contribute in a small way to a much more general process of change, whereby new forms of public discourse can potentially take shape. But I’m very wary of assigning any real power to the cinema or to the festival in this sense.”

Palestinian Film Festival runs from 3-15 May 2013 at the Barbican and UCL.