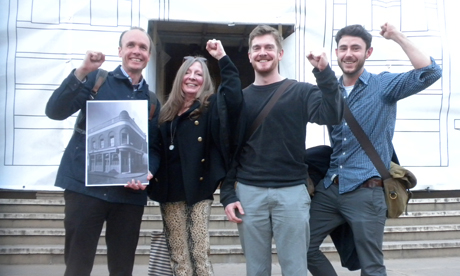 Campaigners are celebrating after plans to demolish a former pub were thrown out by Hackney Council at a packed Town Hall meeting.

The Geffrye Museum had applied knock down the former Marquis of Lansdowne pub in Cremer Street, Shoreditch, in order to build an extension to attract more visitors.

Museum director David Dewing said he was “bitterly disappointed” by the council’s decision, adding: “We are now considering our options carefully. Our priority remains to develop the Geffrye Museum for the benefit of our visitors and the wider community and to ensure the buildings, gardens and collections are opened up to wider audiences.”

The plans included creating a new entrance opposite the Hoxton London Overground station as well as a glazed walkway overlooking the gardens next to the historic almshouses housing the museum, which focuses on the urban living rooms and gardens of the English middle classes from the 17th century onwards.

The council’s planning subcommittee, chaired by Councillor Vincent Stopps, voted six to two against the scheme.

Spitalfields Trust trustee William Palin, who spoke against the plans, said he was “delighted”, adding: “The councillors on the committee have stood up for both the pub and its historic context. We hope now that the museum will rethink the design of their extension and come up with a scheme which satisfies all parties.”