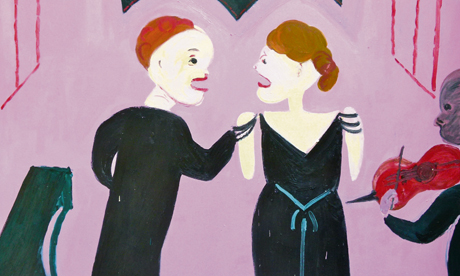 Whether the setting is the opera, safari or a museum, Hayes’ canvases are a window onto the magic realism of an imagination. In an essay to accompany the exhibition Barry Schwabsky writes: “The paintings feel completely observed from life and completely invented by a free imagination all at once.”

When I ask Georgia Hayes how she came to painting, she answers: “When I was a child my favourite thing was making a mark on white paper, an excitement I still feel.” That vital pleasure communicates itself to the viewer in every bright sweep of paint.

When she was younger Hayes was not allowed to go to art school but she “was always dreaming anyway”. At thirty, with a young family, Hayes found herself finally able to study at adult education classes under the teaching of Roy Oxlade.

Her simplified graphic style is often attributed to her late training, a style which, as Schwabsky points out, might “at first glance, be mistaken for aesthetic ingenuousness”.

But Hayes is adamant that, “it is a mistake to think I am self-taught – although I started late, that teaching encouraged me to look for and value original ways to work rather than trying to acquire academic skills, which is the usual way of teaching art”.

As Georgia Hayes lists her artistic influences, it reads like the personal plotting of a route through a vast national museum. They include “Egyptian, Mexican folk art, Early Italian fresco, Hajj paintings, Indian miniatures and Spanish Medieval illuminations, also Manet, Matisse and the late works of Picasso and Philip Guston”.

These interests are collected and curated into the museum setting of many of her paintings, as well as cabinets of crocodiles and boxes packed with canopic jars displayed in museums of fishing, singing and dancing.

“Museums have a slightly stagey, reverential feel that appeals to me,” says Hayes, but her settings are not museums in any dim, dusty-cabinetted or conventional sense: her own feeling of child-like wonder brings them new life.

The exuberant colours of her figurative paintings are display cases for animals more commonly found in the zoo, whilst visitors to her world stand on podiums wearing hot pink platform shoes. Nothing is as we might assume.

“When the painting needs it, I am happy to borrow other things/characters that come to my attention and put them into the museum space. Odd things which I come across or am thinking about at the time often seem to fit happily into the museum,” she says.

Beyond the frivolity of the gaze there is a tipping into the sinister too, although this is never explained or fully revealed – much relies on our own reading.

Cathy Lomax describes in her essay ‘To Paint Is to Be’ the “imaginative joining-up-the-dots of seeing” involved in Hayes’ paintings, where bizarre menageries and cabinets of curiosities are disarrayed by obscure narratives.

But do we need to try to make structure and sense of her graphic nouns? Hayes invites us to relish the pure joy of looking. Perhaps there is a joke, a touch of nostalgia or a memory dipped in fantasy, but all we have to do is look.

Roald Dahl once urged, “above all, watch with glittering eyes the whole world around you because the greatest secrets are always hidden in the most unlikely places. Those who don’t believe in magic will never find it.” Hayes’ way of looking at the world, with the glitter of vibrant oil paints, is one which draws magic and the surreal into the foreground.