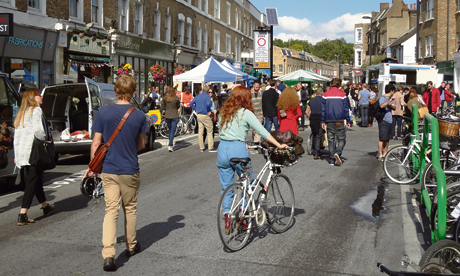 Hundreds of people enjoy a stroll in the sunshine on Car Free Day. Photograph: Brenda Puech

An overwhelming number of people support plans to make a canal bridge and market street free from cars on Saturdays, a cycling lobby group claims.

The Hackney branch of the London Cycling Campaign said a survey carried out by pro-pedestrian group Hackney Living Streets showed an overwhelming proportion of people, 91 per cent, supported plans to make Cat and Mutton bridge south of Broadway Market car-free on Saturdays. Eighty-eight per cent of those polled said extending the Saturday market down to Andrews Road was a good idea.

The car-free scheme was the subject of controversy after some traders in the area voiced disgruntlement last month.

Before a day-long pilot was launched as part of Car-Free Day, several shopkeepers in Broadway Market said the one-day experiment  (22 September) could harm their takings and turn the area into a “race track” for wannabe Bradley Wiggenses.

Mr Veitch said: “We have already had extensive road works, the Olympics and the recession. We can’t afford to have barriers discouraging people coming to the market.”

He said there had not been adequate consultation about the move, adding: “They’ve done this without coming along to businesses and saying, this is what we want to do, what do you think about it, guv? They’ve just done it, which I think is immoral.”

But those in favour of the scheme said the day-long experiment had been a success. Brenda Puech, co-ordinator of Hackney Living Streets, said: “We selected Cat and Mutton Bridge as a good place to mark European Car Free Day partly because of the potential to extend and enhance the Saturday market, and partly to draw attention to the problem of the estimated 3,000 cars and vans that use this bridge daily as part of a short-cut between the A10 and the A107.”

Trevor Parsons, chair of the London Cycling Campaign in Hackney, said: “This through-traffic could be redirected onto surrounding main roads by reserving the bridge for walking, cycling and buses only.”

“Access by car or van would still be available to every address. Filtering an area in this way is the single most effective way to enhance the quality of life and make our streets safer for walking and cycling.”