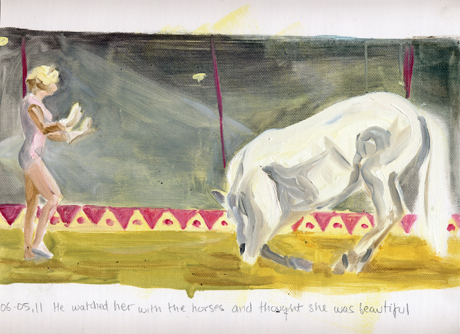 Cathy Lomax, He Watched Her With The Horses And Thought She Was Beautiful, Film Diary series

As the cold weather creeps upon us, the Hackney Picturehouse and Transition Gallery will be collaborating with the perfect antidote to the autumn gloom. Still, an exhibition inspired by ‘the moving magic of film’ and the ‘new reality’ which emerges when we halt this movement, will be taking place across the two venues from 7 to 30 September.

Mix art and film and you have the perfect visual comfort food. Nicola Woodham’s video ‘Neon Alone’ is perhaps the best example of the blurring of genre-boundaries.

Woodham has taken a single frame from Richard Curtis’s Love Actually and transformed it into a purely aesthetic cypher with its languorous movement through cinematic light, silhouette, shadow and luminescent spotting. This repeated frame is entirely estranged from its rom-com context; it has lost that warm, all- pervasive Richard Curtis glow.

Although the exhibition does look critically at the relationship between art and film, it is also not afraid of pastiche or parody. Paul Kindersley’s larger-than-life disembodied heads are a queasily comic tribute to the sticky gore of horror.

In Cathy Lomax’s ‘Film Diary’, in which she paints a single freeze-framed scene from every film she watches, there is no sense of discrimination. Despite being intellectually and theoretically engaged with film in her studies, Lomax is just as likely to be caught borrowing from Twilight as she might from an obscure masterpiece such as Vincente Minnelli’s The Pirate.

The exhibition celebrates our cultural immersion in a cinematic reality; stories, dreams, the living out of fantasies which might begin to feel more real than everyday life.

Jackie Chettur’s meticulouslyconstructed sets in hotel rooms come to resemble ‘the backdrop to a film we think we may have seen.’

There is a strange sense of déjà vu which strikes the viewer. Scenes and faces borrowed from films seem familiar but often lie somewhere beyond the reach of recognition.

The exhibition is accompanied by a special issue of Transition’s Garageland magazine dedicated to film. Each of the artists included in Still have contributed to the issue; Paul Kindersley revels in horror’s lust for blood and ‘schlock tactics’, Alli Sharma wallows in her infatuation with the Kitchen Sink aesthetic of social realism, and Jackie Chettur reveals the secrets behind her hyper-realist film sets.

Garageland 14 is, at heart, a collection of adoring love letters to film. Images framed on glossy whitepaper are like screens in which we might catch movement or a narrative, its content page reads like rolling credits, interviews run like scripts, a thumbnail strip resembles a storyboard. This issue of the magazine is edited and produced with all the visible traces of film fanaticism.

Still is totally joyful and honest about its passion for film and it’s this which makes it the perfect visual comfort. It’s the exhibition equivalent of the cinema on a rainy afternoon or a large bucket of salted popcorn.