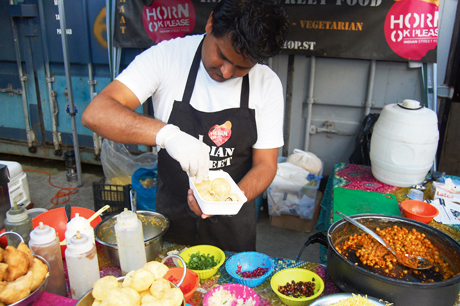 At the beginning of the year, we made a few predictions about what we thought people might enjoy eating and drinking in 2012.

Some of them were spot on: BBQ has never been bigger in the UK, with Hackney’s own Duke’s Brew and Cue flying the flag for authentic Southern-style food. And while Korean fried chicken may not have landed the way we thought it would, poultry as a whole has made a huge impact.

Street food maestros Spit and Roast can be found slinging buttermilk-fried chunks of joy all over town, often on Saturdays at the Hackney Homemade FOOD market.

In fact, humble chicken has taken off so much that serial restaurateur Mark Hix has opened up a new restaurant down in Shoreditch, the Tramshed, where half the menu is comprised of plates of our feathered friends.

But arguably our greatest moment of clairvoyance was to tip the emergence of the night market. There wasn’t a lot to say that it was coming.

Last year, street food was almost exclusively a middle-of-the-day deal: witness the pioneering eat.st venture in King’s Cross, which builds its opening hours around the lunchtime rush, making it the preserve of Guardian employees and the budding fashionistas from Central St Martin’s. Now, evening street food parties are popping up faster than you can say “hold the onions.”

A glut of quality vendors means that almost every food imaginable is available for nocturnal consumption, from perfectly pink offal burgers to savoury Japanese pancakes (okonomiyaki), and Austrian-style schnitzel made with rare breed swine.

At the forefront of the night market movement is Street Feast, a bigger, better, and later version of eat.st. Last month we were excited to reveal that, following successful but short-lived stints on Brick Lane and Camden, it had landed in Dalston.

Here, in an E8 car park, it has surely arrived at its spiritual home. As Mark ‘the Ribman’ Geveaux put it earlier this year: “I just don’t see people in Kensington sitting around a car park.”

On a recent visit, Street Feast boasted a frankly ridiculous 13 traders plus a craft beer bar courtesy of the Camden Town Brewery, making it the perfect stop for a swift bite or full-on dinner. Uninitiated types are advised to start with the legends of the pavement, including the aforementioned Ribman, a cult figure thanks both to his melt-in-the-mouth rib baps and his infamous range of Holy Fuck hot sauces.

Big Apple Hot Dogs is another bright star. The lonely figure once cut by maverick sausage-slinger Abiye Cole on the Old Street roundabout has evolved into a medium-size enterprise with multiple venues, and the prestige of supplying serial restaurateur Russell Norman with the dogs for his latest eatery, Mishkins.

Reassuringly, quality hasn’t slipped since the rain-or-shine Old Street days. The jovial lads from Homeslice are also back on their native patch, offering some of the freshest wood-fired pizzas this side of Italy.

More seasoned street foodies will enjoy the exciting array of new faces. Pom Pom Takoyaki is one of the best undiscovered delights, offering Japanese takoyaki, a golf-ball sized Japanese snack. Softer than gyoza and lighter than dumplings, the wheat-flour shell melts in the mouth, giving way to a headily-seasoned mix of diced octopus. Garnished with crisp fried spring onions and featuring moreish drizzlings of various sauces, it’s pretty much the perfect appetizer.

If you want to start with something even more ethical, another exciting new player is Horn OK, Please, which offers vegetarian Indian street food good enough to tempt even the most hardened carnivore. The samosas are excellent, but the dahi puri is the star of the show and one of the best iterations available in the capital.

For more substantial eats, Mama’s Jerk Station does some of the best Caribbean food in London. Just how good is it? Good enough to get celebrated TV chef Lorraine Pascal down for the night. Their jerk is best experienced as part of a wrap, accompanied by plantain chips.

Pop-up Barbados also brings good time sunshine vibes to Hartwell Street, serving delicious grilled king prawn skewers, freshly shucked oysters, and Bajan fish cakes using fish from local sustainable fishmonger Fin and Flounder in Broadway Market. Main man Barrie lives just down the road, so if you can’t make it to Street Feast on Fridays, be sure to check out his supper club. Seychellean outlet Vin Goute is also well worth seeking out: their hot pepper sauces are the finest thing since Holy Fuck and the perfect complement to their tender goat curry.

A wide range of desserts makes it possible to have a top-quality three-course meal at a fraction of restaurant prices, and there’s even seating for those wishing to dine in style. Only one vendor has disappointed at Street Feast thus far. Yum Jungle’s fried chicken was underwhelming: blandly seasoned and featuring a rubbery bit of bird that lacked crunch and flavour.

Street Feast isn’t the only night market in the area. Just down the road in Old Street, the Red Market has only been going for about a month now, but could evolve into a real contender. Some of the food needs a bit more time – newcomer Bleeker St. Burger’s NY-style patty wasn’t cooked to precision and their sweet potato fries were hideously soggy. But other vendors are already up there with the best, especially Burger Bear. The location is good and the seating area is covered, meaning that the odd shower needn’t spoil the evening.

The only real downside is overzealous security. On my visit, the car park guards were clearly auditioning for the lead role in a Guy Ritchie movie. One cut a seriously menacing figure and nearly trashed my camera when he thought he might appear in a shot of the car park’s graffiti murals.

That aside, Street Feast is highly recommended to both native Londoners and Olympic visitors wishing to sample the best of the capital’s multicultural food scene in one location.