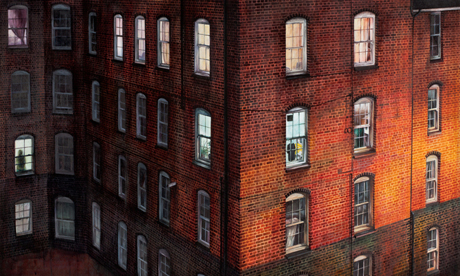 East London has spent recent years undergoing major reconstruction in preparation for this month’s Olympics. Though the intention may be to spruce up the area, Hackney-based artist Frank Laws feels uncomfortable with all the changes.

“I feel odd about being here at the moment,” he says, “with the huge redevelopments going on, especially around the Olympics, Hackney’s massive gentrification and the way things are changing so quickly.”

Equally embittered and captivated by the new constructions springing up across the borough, as well as the redevelopment of existing high-rise social housing, Laws has been documenting the changes for a series of paintings that will be exhibited in a solo show, London Bits, at Bloomsbury’s Orange Dot Gallery.

Working mostly in ink, with some watercolour and acrylic, he has photographed the daily progress of building work taking place at Valette House, off Mare Street. This served as the basis for a large painting which will form the centerpiece of his show next month.

He wonders if working as a labourer when he first moved to London (from a village called Spooner Row – “I think they used to make spoons there”) made him more perceptive of the buildings surrounding him and the way they were constructed.

But he is also interested in the history of East London’s social housing. “East London was one of the first areas in the city to undergo slum clearance and redevelopment,” Laws explains, “I find the work, planning and care that went into those projects really reflects the idea of making things better for people.”

He hopes to relay his admiration for the efforts that were made to aid people during difficult times through his paintings, as well revealing the aspects of the estates that people often overlook: “I like the everyday feeling about estates, the things people don’t notice.”

Alongside the paintings of social housing, Laws says he will be showing another large piece containing snapshots of London life.

He has been posting his work on a tumlbr throughout the exhibition preparation process at Frank Laws tumblr.