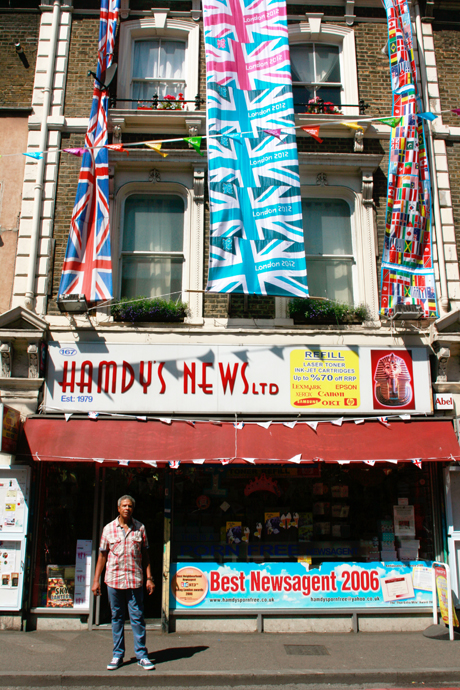 A Stoke Newington newsagent was ordered  by Hackney Council to remove festive decorations from his shop on the day the Olympic Torch relay passed by.

Hamdy Shahein, a well-known community figure, had decorated his shop, Hamdy’s Newsagent, with balloons, banners and bunting for the occasion.

On Saturday morning, however, Mr Shahein was visited at his Stoke Newington High Road premises by enforcement officers from Hackney Council.

They questioned him as to whether the decorations were official Olympic merchandise, and then demanded that he remove them.

Mr Shahein objected to what he saw as the  heavy-handed approach towards the offending items.

“I was shocked because I was making an effort to do something nice for the community,” Mr Shahein explained.

He maintains the decorations are legitimate and was unhappy  that the officials should have questioned their authenticity: “These are not fake; I paid a lot of money for them.”

A crowd of loyal Hamdy’s customers remonstrated with the council officials, arguing in the newsagent’s defence.

I vote we all head round Hamdy’s #stokenewington with plenty of balloons and bunting. Olympic branding control getting out of hand #hackney — Julia Thackray (@realfamilylaw) July 21, 2012

Mr Shahein recounts how not long after the council officials left, a van full of police officers arrived at his shop to confront him.

@suzanne_moore @anyapalmer Final word on Hamdy bunting/balloon saga is that van-load of police turned up! No idea who called them…

He told the Hackney Citizen he was so upset by the incident that he considered shutting up his shop for the day and going home.

Local solicitor Kristin Heimark believes Mr Shahein was ill-treated: “Hamdy is one of the lynchpins of our community. He likes to get in the spirit of things.

“I don’t know if people realized when the Olympics laws were passed that it would mean this, and that we would have people from trading standards coming round requiring bunting to be removed,” she commented.

Trading Standards officers have the power to enforce under the Trade Marks Act 1994 and the Olympic Symbol Etc (Protection) Act 1995.

London mayor Boris Johnson has warned of the “insanity” of heavy-handed policing of Olympic brands whilst Michael Payne, a former marketing director at the International Olympic Committee, has said such action risks damaging the Games.

A spokesperson for Hackney Council said: “Trading Standards officers in Hackney and all over the UK take action against the sale of counterfeit goods. Like every other local authority, Hackney Council is adhering to LOCOG’s guidance on Olympic branding and merchandise.”