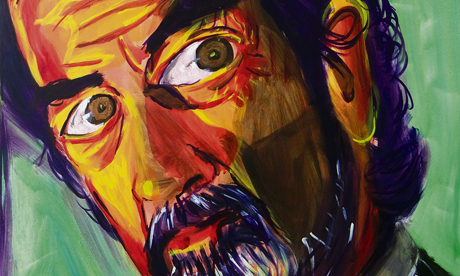 Dictators are notorious for their unrelenting wickedness, but Sacha Baron Cohen has chosen to parody them for his new film The Dictator, whilst painter Jasper Joffe believes there might be beauty behind the beasts.

“Dictators are grotesque,” says Joffe, “but when I was painting them I considered how beautiful Gaddafi looked, how extraordinary his face was.”

The dictator series is predominantly male, with Margaret Thatcher thrown in because “although she isn’t a dictator or a mass murderer in the conventional sense, she started a war. She made that decision to send armies and kill people.” The same goes for Ronald Reagan, the only other “elected dictator” in the exhibition.

Joffe started painting actresses because he wanted to paint conventionally beautiful people. “They are held up in society as the most beautiful people to look at,” he says.

That all the beautiful people are female and nearly all the bad people are male reflects Joffe’s belief that “men are always the bad guys: evil, selfish, sexist. I don’t think I’m one of bad guys but perhaps it’s in the back of my mind that I could be,” he reflects.

That is why, of the three self-portraits he has included in the exhibition, one is featured amongst the dictators and two are nestled in with the beautiful people. He found completing the self-portraits an act of liberation: “I put myself in the show as protagonist,” he explains. “I’m in my underwear, which is a vulnerable position, and I made myself uglier by deforming my body.”

Depicting himself in a painting is, he says, “in a romantic sense, an escape from the limitations of life.”

He has attempted to capture the temporary glory of beauty in his portrait of Nicole Kidman: “She is older than the others, so I’ve tried to capture the strain of having to keep up her appearance.” He achieves this with the blemishes he has swept across her chest. Joffe recognises the pressure on Hollywood actresses, as “any change to their body is commented on.”

He has already sold the entire dictator series: Charles Saatchi bought one of his Himmler portraits from another exhibition the dictator paintings sell better than any of his other portraits. “People are drawn to these paintings because the image is compelling. Maybe people like bad things?”