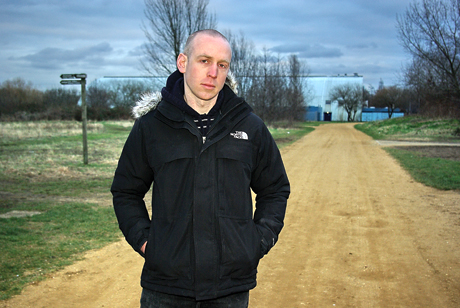 Long a minority pursuit, poetry has recently grown hugely popular, particularly in its incarnation as a performing art.

Spoken word events have popped up lately in East London venues large and small – from the back rooms of pubs to major arts centres. Sam Berkson, AKA ‘Angry Sam’ is one of the leading figures in Hackney’s spoken word movement, running the Hackney Hammer and Tongue performance poetry night at the Victoria pub in Dalston.

The Hackney Citizen caught up with Angry Sam to discuss the evolution of the genre and his own place within it.

HC: How would you describe the spoken word scene in Hackney? How has it evolved in recent years and what makes it distinctive?

SB: I’ve been running live poetry events since 2005, and been going to them and performing at them since 2002, but I’ve moved around the country a bit and only lived in Hackney for the last few years so I can only compare this scene with what I’ve seen elsewhere, not with what it was like before.

Hackney is not the most accessible place to get to in London (although that’s changing a bit) but it’s a good place for establishing a local scene. A lot of people round here are interested in art of an underground, communal kind of vibe – and that’s where spoken word is right now – even if they’re coming at it from a number of different angles.

Spoken word nights round here attract a largely local but really diverse and engaged group of people and I think that’s what makes Hackney distinctive. Performance poetry is getting more attention these days but it’s still not very well known as entertainment, so it often shares the stage with other artforms – and generally that’s a good thing because you avoid pigeon holes and reach more people.

Lyrically Challenged at Passing Clouds starts with poetry and then merges into a hiphop night; The Bus Driver’s Prayer which has just started up at The Hackney Attic in the Picturehouse, puts on poetry and music, mainly singer-songwriters and acoustic stuff; Speech Motion at The Others and Akilah Live put on poetry with short films. It fits in with comedy too. Hammer and Tongue is entirely a poetry night, but that’s just the way that we run things. We always have a DJ in between the acts and quite a few of the poets we put on use music as backing for their poetry and are also MCs or stand up comics or singers.

HC: What is the best kind of venue for this type of event, and why does Hammer and Tongue work?

SB: It can work in a lot of different spaces, but it’s good to have a large enough venue with some comfortable chairs and not too much noise-bleed from elsewhere so people don’t have to stand up and you can build atmosphere. There’s nothing like the sound of 150 people sitting in silence, totally absorbed in the sound and the meaning of a poet’s words. It’s totally different from reading on your own.

Hammer and Tongue works cos we mix up the amateur with the professional and we try and keep it entertaining. Hopefully we’re good judges of poetry so we book the right people – the kind of people who you can put on in front of an audience who have never been to a poetry night before and they’ll completely change people’s minds about what poetry is and what it can do. Artists tend to enjoy working with us because we thoroughly respect what they do.

Then we run open mic ‘slam’ competitions so people can get on the same stage and enjoy the same reception that the pro poets have just had with people in the audience as their judges. The competition element makes it fun but it also does an important thing in that it makes ordinary people into the ‘stars’ and it asks ordinary people to express their opinion on poetry – you don’t have to be an academic you just have to know what you like.

HC: How did you get involved in spoken word and what attracts you to this genre?

SB: It’s a bit of cliché but I guess poetry found me. I’m a verbal person, I like words. I have always listened more to lyrics than to music. I started to write as a teenager mainly imitating what I heard in metal and rap and punk lyrics and from the few things that I read. When I came across Hammer and Tongue in 2002 which then was just a monthly event in a bar in East Oxford, before it expanded across the country, I was completely blown away by the way poets delivered their work and how much fun people had being part of a live audience, listening to poetry.

What attracts me is the possibility of dealing directly with language and meaning – so people can share ideas that are, hopefully, relevant to us all, that can unite people and challenge some of the notions that you get in mainstream media and politics. And because you’re performing it live, you get an instant response from a whole room full of people, and because you’re using sound and rhythm and imagery and not just lecturing people, it can be remembered and passed on and developed.

HC: How would you characterise your own work? What are you trying to achieve?

I try to write about topics that matter to us right now or are honest about myself and my own experiences in a way that uses comedy but isn’t only comical, that entertains but it isn’t only entertainment. I want to make things that resonate with as many people as possible, with their sound and with their meaning.

HC: You call yourself ‘Angry Sam’ – why have you chosen this particular moniker?

SB: “The foundations of tyranny are firm and cannot be plucked up without the anger of the larger part of the multitude.” – Baruch Spinoza, 1670

On Saturday 31 March the Hammer and Tongue UK Slam final will be held. The event includes winners from regional slams across the country and inter-city team slams. It will be held at Wilton’s Music Hall, 1 Graces Alley E1 8JB. Team slams from 1pm; Solo UK competition from 7pm. Tickets available at wiltons.org.uk. The 3 April Hammer and Tongue at the Victoria features Chris Redmond ‘Ventriloquist’ and open mic slam.

← Letter: the decline in Hackney’s child povertyLiving the life of Riley’s →