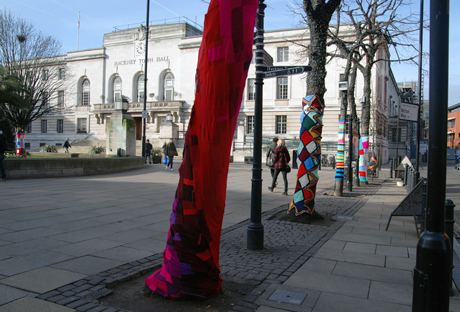 With a warm and cosy knitted cheer, Yarn bombers struck in Hackney earlier this week.

Last Sunday evening, when all was dark, ten friends met to assemble garments they had hand knitted onto eleven unsuspecting trees outside Hackney Town Hall. By Monday morning (20th) passers-by were treated to a magical knitted creation.

A collaborative project between Kirstie MacLeod and nine other creatives, this is their first project of the knitted street art kind.

The location was carefully chosen: outside some of the borough’s main public buildings, with traffic passing in front. MacLeod explains the choice of site: “[It’s] close to where the riots broke out last year; so much has happened within metres of where these trees stand. It seemed an obvious choice.”

In a light-hearted spirit, their handiwork has brought an element of fun and joy onto some of the borough’s streets.

Taking five weeks to make, each item was made-to-measure for the individual tree; the garments were designed to be removed and assembled with ease. MacLeod explains: “Unlike normal yarn-bombing where knitted items are stitched very tightly to the objects, these garments each have buttons, toggles or zips on them.” Snugly fitting around the trees like jumpers.

Yarn bombing or knitted graffiti is a form of graffiti where knitted garments are stitched onto street furniture and objects within the urban environment. Its objective is to breathe new life into public place through initiatives like Knit the City,  and “improving the urban landscape one stitch at a time”, which is the Yarnbombing.com motto.

Since the knitting craze started ten years ago, it has taken off around the world; with copycat groups getting inspiration via each work broadcast online. Organic in its nature, the idea has spread very quickly through online social media sites.

Just recently  ‘home-made’ knitting clubs like ‘Stitch ‘n Bitch’ and I Knit London have sprung up across cities and there are many more alike to meet the craft uprising. Cast Off is a knitting club that stages knit-ins on the London Underground, enjoining people to “come and join the knitted adventure!”

Sadly the knitted jumpers on these Hackney trees are soon to be removed. So what next?

The group plans to recycle and reuse the garments elsewhere in Hackney and is in the process of measuring up new sites. Says Kirstie: “We are next looking at upholstering objects on the streets of Hackney – like discarded bikes…”

So watch this space. Even better, if you like the idea, why not pick up a pair of needles and join in the fun? 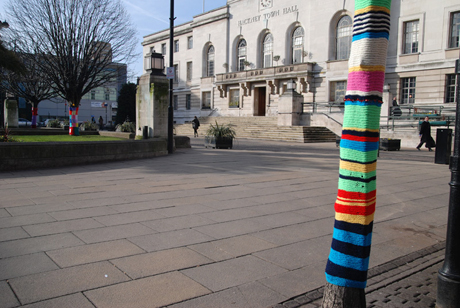 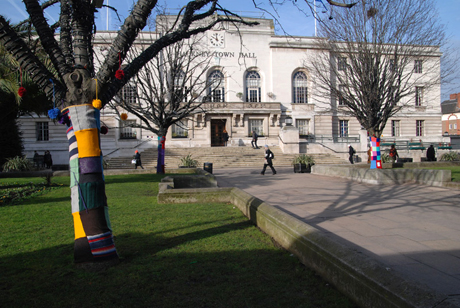